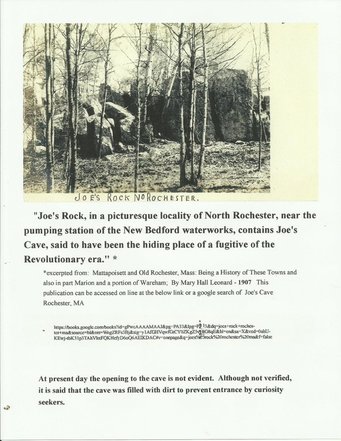 Legend: Located behind the Quittacas Water Treatment Plant, is "Joe's Rock". The rock formation contained a cave called "Joe's Cave". This cave is said to have been the hiding place of a fugitive from the Revolutionary Era.

Daniel Ricketson, New Bedford historian wrote in his journal on Sept 30 1855 (p. 339) that he was told by a cousin of Marcus Morton (Freetown) that Joe's Rock was named after Joseph Ashley.

Joseph Ashley (born c 1720 died c 1754) and his brother Abraham Ashley owned the land on the northwest corner of the crossroads of North Ave. and Braley Hill Rd. This land contains "Joe's Rock". 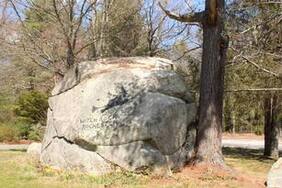 Courtesy Ken Costa
Witch Rock
Legend: According to Native American legend, the rock was always part of the property, and was the site of a witch hanging during the witch trials in the 17th century. The Indians believe the spirit of the witch lives inside the rock, and during a full moon, you can hear the cackling and screaming of the witch from inside the rock.
The rock was initially a Native American holy place. Native shamans would sit and watch mists rise from the crevices in the stone. English settlers usually labeled native religious practices as witchcraft, so it makes sense that an Algonquian holy rock would be renamed Witch Rock.

At the intersection of New Bedford Road and Vaugh Hill Road is a large rock with the words “Witch Rock” painted in black. Shirley Vaughn Thompson Norton had told the story behind the rock to her family for many years. She related that her family descended from the Pequawket and Abenaki Indian Tribes. The Pequawket Indians were originally from Maine, but relocated to Massachusetts after the tribe sided with the British during the Civil War against the Abenaki Indians. The tribe was ordered out of town. The Boston courts moved the tribe to Mattapoisett, before ending up in Rochester.
Norton started the silhouette painting of a witch on a broomstick, along with the words "Witch Rock." were painted onto the rock in 1990.  Today her family no longer owns the property.