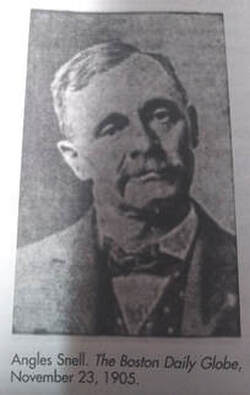 Tillinghast Kirby, 87, Victim #2 1903 Westport, MA
Tillinghast Kirby went fishing on Sept 9 1903 and never returned. He was reported missing to law enforcement.  Two days later, a notice was run in The Standard notifying locals of the fact that he was missing and requesting any information. His boat was found anchored offshore, and it was then thought that maybe Kirby had experienced a medical issue and fell over board and drowned. Extensive shoreline searches took place but nothing was found.
On Sept 16 1903 the Standard Times reported that Kirby's boots had washed ashore on Horseneck Beach. Kirby never went fishing without his boots, now suspicion began to rise about Kirby's disappearance. On Sept 18 1903 the body of Kirby washed ashore and was discovered by other fisherman.
The body was briefly examined at the beach it was found to have an anchor wrap around his neck. The anchor wrap had been attached to a weight, and was used to keep the body underwater. Kirby has also suffered from a blow to his head, probably killing him instantly.

Victims #3 and #4  Westport, MA
Two vacationers to Westport MA from parts unknown, their identities and locations of their remains are unknown.

Victims #5 Westport, MA
An unidentified "Portuguese" man from a neighboring town, his identity and location of his remains are unknown

Angles Snell, Died in prison 1910
Snell resided in the same house as Tillinghast Kirby in Westport, MA and had intentioned of operating an illegal liquor sales business there. Kirby however found out about this plan and attempted to stop it. So how do we get to murder?
It was documented the Kirby had taken a signifant amount of from the bank (between $1600 and $2000), and it was thought he may have had this money on him when he went missing. When Kirby's body was recovered no money was found.
Snell had gone fishing the same day as Kirby, but later in the day was seen in local bars acting reckless and displaying a stack of money. Oddly even paid someone to drive him to the shore when reports of the body washing up reached him. Snell had no explanation for the source of the money.
Early in the investigation, Snell claimed that Kirby always had the wrap with its attached weight in his fishing boat. But when asked about this in court - was the wrap and weight with Kirby that day - Snell slipped and admitted that "He couldn't have had it," (since Snell, himself, was in possession of the object). That was the slip that was thought to have convicted him. Subsequently, the owner of the boarding house where Snell was living reported that he lent Snell the anchor wrap.
Snell was originally sentenced to death, but the sentence was commuted to life in prison. Snell died of a massive heart attack in prison on March 15 1910.
At the time of his death, there is claims that Snell had confessed to five (5) murders and divulged the motives for the murder of Tillinghast Kirby and Peleg Cornell
Snell claimed that four (4) murders were committed with robbery as the motive. Snell confessed that Tillinghast Kirby was different - revenge was the motive, however although he apparently also acquired some money as a result. 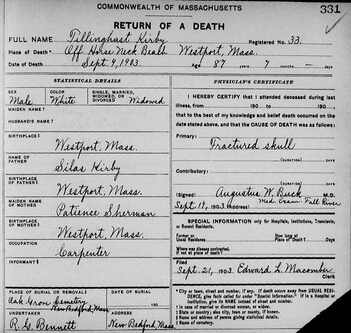