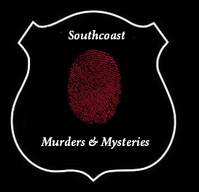 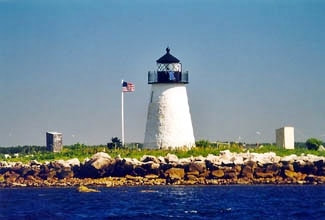 Bird Island Lighthouse
Mystery: The island is said to be haunted since the death of Mrs. Moore. According to a newspaper article in the Standard Times, reports from some later keepers were frightened by the “ghost of a hunched-over old woman, rapping at the door during the night.” Subsequent keepers had similar experiences and one even claimed his children were repeatedly frightened by the spirit of a "stoop-shouldered old lady" with one arm extended as though reaching out for something.

Background:
Bird Island is a small 2-acre island off the coast of Marion. A lighthouse was constructed on the island in 1819 with William Moore assigned as keeper on September 1 1819 and remained till 1822.
In 1822 the body of Mrs Moore was discovered. Her husband suggested she had "succumbed from nicotine" as she did have a fondness for tobacco, but she officially died from tuberculosis. In 1899 the original keepers dwelling was torn down. Oddly, during the demolition a rifle and a bag of tobacco and a note signed by William Moore was discovered.
This bag contains tobacco, found among the clothes of my wife after her decease.  It was furnished by certain individuals in and about Sippican. May the curses of the High Heaven rest upon the heads of those who destroyed the peace of my family and the health and happiness of a wife whom I Dearly Loved.   In 1882 after the death of his wife, William was assigned to the new Billingsgate Lighthouse near Wellfleet and remained there until 1830.
In 1933 the construction of the Cape Cod Canal and illuminated buoys led to the lighthouse being deactivated. The dwelling that was attached to the lighthouse along with other structures were destroyed in the 1938 hurricane. The U.S. Government declared the land surplus, and in 1940 sold it at auction to George Harmon of Maine for $654. A month later the island was purchased by Augustus Fiske of Rhode Island.  The Town of Marion purchased the island in May 1966 from Mr. Fiske’s heirs for $2,500 and remains the current owner. The light was reactivated as a Private Aid for Navigation on July 4 1997.