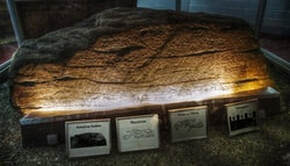 Dighton Rock
Mystery: Where did the carvings come from ?

Dighton Rock is a 40-ton boulder, located in the riverbed of the Taunton River which was originally part of the Town of Dighton.
The first verifiable reference to the carvings on the boulder dates back to 1680, when Harvard graduate John Danforth spotted and made a drawing of its carvings. That drawing — which is now in the collection of the British Museum — shows only the uppermost section of carvings, perhaps because the rest was obscured by water at the time of Danforth’s visit.
A depiction of the Dighton Rock carvings was published in the French edition of Henry Wheaton’s 1831 book, History of the Northmen: Or Danes and Normans, from the Earliest Times to the Conquest of England by William of Normandy.


As for who created the carvings and what they mean, there have been more than three dozen theories put forward over the years. Danforth probably had it right, though, when he suggested that the stone was the work of Native Americans. To his eye, it seemed to tell of an encounter and subsequent battle with visitors who arrived by ship. Despite the logic of Danforth’s theory (and the presence of many similar indigenous petroglyphs in the region), others have insisted that there must be a more creative story behind Dighton Rock.
The 18th-century educator and theologian Ezra Stiles saw the stone as proof of a visit from ancient Phoenicians, while an alternative theory put forward around the same time attributed the carvings to long-ago visitors from Carthage. In the 19th century, Danish historian Carl Christian Rafn was convinced that Dighton Rock had been carved by Vikings. In the early 20th century, Brown University psychology professor Edmund Delabarre asserted that the carvings were Portuguese in origin. More recent theories have proposed Chinese, Japanese, or — of course the ridiculous— alien origins.
In 1951 the Massachusetts Legislature expropriated the land along with additional land, forming Dighton Rock State Park, which is 100 acres in size.
The rock was removed from the river in 1963 in order to construct a coffer dam. The rock was then installed in a museum in a nearby park in 1980. 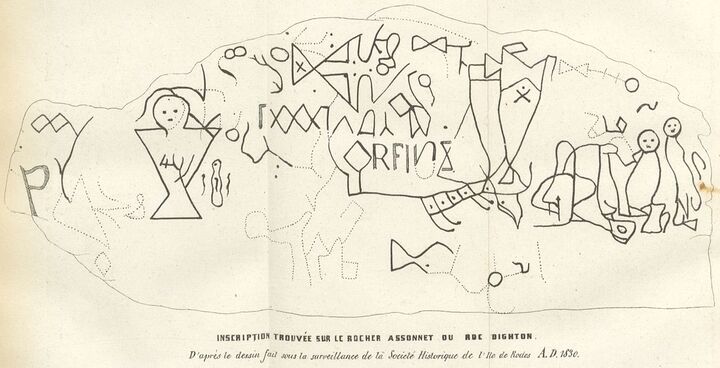