Courtesy Columbia County Jail
Ausarmaat Rahotep 2020                                          Trial Pending ​
On August 11 2020 at 9:51 PM New Bedford Police responded to the area of 139 Dartmouth Street for a possible shooting.
Upon arrival New Bedford Police located the victim, Ausarmaat Rahotep (41), shot seven (7) times. He was transported to St Luke's Hospital and was dead at 10:16 PM.  Rahotep, a truck driver, is from Georgia and was residing in New Bedford with his sister due to COVID-19.
On February 25 2017 Rahotep was arrested in Florida after threatening the life of President Donald Trump.
Rahotep, 37 at the time, of Central Falls, R.I., called the Columbia County Combined Communication Center and stated to the 911 operator that he was headed to Donald Trump with bombs. At the time he placed the call, Rahotep was parked on the side of an interstate I-75. When deputies arrived, a pursuit began, weaving across all northbound lanes — but never speeding.
Eventually, Rahotep pulled into an agricultural inspection station on I-75. The truck and trailer were searched by a K-9 from the Valdosta Police Department for explosives, none were found.
He was arrested for reckless driving, fleeing and attempting to elude and making threats against elected officials. he was released on March 3 2017 on $20,000 bail. 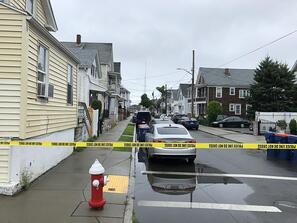 Second Suspect Apprehended
On August 6 2020 Bruno Lopes (24) of New Bedford was arrested in connection to the death of Keven Rocha. Lopes was charged with Armed Assault in Dwelling, Carrying Firearm without a License, Carrying a Loaded Firearm without a License, Attempted Assault and Battery with a Firearm, Malicious Destruction of Property Over $1200 and Discharging Firearm Within 500 Feet of a Building.

Investigation
Lopes and Rocha (the victim) were captured on video surveillance leaving Monte’s Park together and arriving on Margin Street. Both men entered the home, at which point, it is alleged that Rocha pointed a gun at the people inside. A struggle ensued and Rocha was apparently shot and killed with his own gun.
After initially leaving the home on foot, the Lopes was seen on video surveillance going back to the home with another gun a few minutes later and shooting at the house from outside at least seven (7) times. The weapon used to shoot at the home was recovered by New Bedford Police.
Lopes had previously been convicted by a jury in Fall River Superior Court in May 2018 on charges of Carrying an Illegal Firearm and Attempted Assault and Battery by Discharge of a Firearm. Lopes had been sentenced to serve jail time on those two charges, However, Judge Gregg Pasquale “allowed the defendant’s motion to set aside both jury verdicts based on their contention that the defendant could not be identified as the shooter on surveillance video.” and Lopes was released from custody.  In 2019 Lopes was again convicted of illegally possessing a firearm and discharging the weapon into an unoccupied vehicle.
On July 2 2020 Lopes was arrested by Providence RI Police during a night of rioting. Lopes was charged with disorderly conduct.