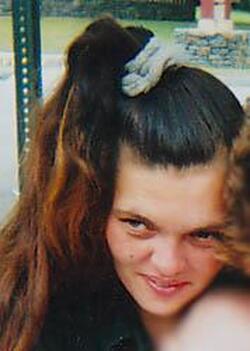 ​                                               Carolyn Moore 2004                       Status: Unsolved Death
Carolyn Moore (28) had a history of drug abuse, when she went missing on August 23, 2004 from Taunton. Her jacket was found in bushes beside a Winthrop Street restaurant days after she went missing. Moore had been living on the streets when she went missing and her family was trying to get her committed to a drug rehabilitation center.
At the time, police and search dogs combed parts of the city, including spots downtown where the mother of two had been known to hang out. Parts of the rivers in the city had also been checked by divers. Her photo was also posed on national missing persons Web site, including the National Center for Missing Adults.
On October 29 2008 skeletal remains were discovered 500 feet from railroad tracks off Plain Street in Berkley.  In 2009 the remains were positively identified they DNA as Moore. Investigators were initially able to track a surgical plate from the remains to Morton Hospital and Medical Center, then to surgery done on Moore a number of years ago.
The search for Carolyn Moore is finally over. Investigators are now trying to retrace Moore’s last steps to learn how she wound up dead in Berkley, a town next to Taunton, and who she may have been with at the time. The cause of death was undetermined.