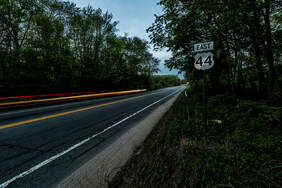 It all began with a book called "New England Ghost Files" (by Charles T Robinson 1994).
Eyewitnesses in his book describe the apparition as being in his forties, usually wearing a plaid shirt, and has red hair. In nearly every account he has a strange sneer on his face and a haunting laugh. Differences in his physical description are apparent from account to account. Sometimes he's neatly dressed, other times his hair is a mess and his clothes are unkempt.

All of these encounters are paraphrased from The New England Ghost Files:

Winter 1969 - A man was startled while driving down Route 44 late one night when he glanced out his passenger side window and saw a sneering face glaring back at him. Realizing that this was physically impossible as the car was traveling at 50 mph at the time, the man swerved off the road and jammed on his brakes. When he looked out the window again the strange face had mysteriously vanished.

Summer 1973 - A Seekonk resident stopped his pickup truck to offer a man on the side of the road a ride late one summer's night. Once the stranger climbed inside he began behaving oddly, refusing to acknowledge the driver's questions regarding his intended destination. As a result the driver quickly became uncomfortable. He pulled over and demanded that the hitchhiker exit the truck. The stranger complied - but instead of opening the door and stepping out he disappeared right before the driver's eyes.

February 25 1981 - A young woman slams on her brakes, but unfortunately she's too late. Screaming she plows right into the man standing in the middle of the road. Once the car comes to a complete stop, the woman leaps out to aid and to waive down another car for help. Instead of finding a wounded man, she finds nothing. The woman stands there for a second and tries to collect her thoughts. She definitely saw someone...and then she hears it. A terrible mocking laughter coming from the nearby woods. Frightened, she returns back to her car and continues on, trying to put he bizarre incident out of her mind. And then it happens again. Once more the man instantly appears in the middle of the road, and once more she hits him. Too rattled to exit her car, she rolls down her windows and inspects the highway. There is no one there, just as before. But the laughter returns, this time, much closer, as if it's right outside the car. Terrified, the woman peels out, leaving whoever, or whatever, behind.

October 16, 1984 - On the night of the sixteenth a couple's station wagon broke down on the side of Route 44. The man told his girlfriend to stay in the car while he walked towards the nearest gas station in search of a phone. On the way, he encountered a strange redheaded vagrant sitting by the edge of the road. He was disheveled and kind of dirty. With his mind fixated on calling AAA the man asked this strange drifter if he knew where the nearest phone was. No reply was given besides laughter. That's when he noticed the strange man's eyes. They were completely clouded over, with no visible pupils. The man hurried away, and when he looked over his shoulder he noticed that the vagrant was nowhere to be seen. But he could still hear him. The laughter seemed to follow him the entire way back to the car. When he finally returned he was surprised to find his girlfriend hysterical in the front seat. She told him that she turned on the radio to pass the time while he was gone. A weird voice began to break into the broadcast. At first she thought it was the local DJ, but then it began to address her by name. The voice laughed a terrible laugh, and taunted her. Shaken and disturbed the couple eventually got the attention of a passing car and was able to call AAA.

Since publication of Robinson's book the Redheaded Hitchhiker has become a legend.  The entire story, actually all the stories just don't contain verifiable facts.
"Wait a minute! What about all that eyewitness testimony mentioned previously? How do you explain what all these people witnessed?"
Well, to be honest, I can't.  As of today I have yet to meet anyone who has actually seen the hitchhiker themselves or knows anyone who has seen him.
As for the testimony related in The New England Ghost Files, The witnesses' identities aren't known and their accounts can't be verified. Additionally the author admitted to changing  all of the witnesses' names to protect their privacy.

There is no physical evidence that the hitchhiker on Route 44 is real. He has never been recorded by tape or film and never been photographed.  Descriptions of him vary.  He never talks or explains why he might be there. There is no record of who he might be.
More recently, thanks to the internet a name surfaced as a possible identity, “Herbie Redd”. The man was a farmer who was hit and killed on the same stretch of road he haunts while trying to change a tire. In checking obituaries and death certificates "Herbie Redd" couldn't be found.

Rehoboth Village Cemetery
Mystery: Is the cemetery haunted? or just a legend ?

"Old Ephraim" is the leading attraction at the Cemetery. Since 1994, there have been repeated manifestations of this particular entity. There are six (6) males by the name "Ephraim" buried in the cemetery. None are connected to a "Catherine" or "Katherine" either by marriage or having any children by that name.

January 17 1994 Statement by Daniel and Barbara Miles
"We were standing in the center of the cemetery, visiting a relative's grave, when suddenly in a spot at the southwest rear of the graveyard, where there had been no one present just a moment earlier, an elderly man who had a prominent hooked nose and a sneering facial expression, was curiously kneeling on the ground next to a gravestone. He seemed to be praying and alternately sobbing and laughing. After less than a minute, the bizarre figure suddenly disappeared, and we both hurried out of the cemetery in a state of alarm."

August 21 1995  Statement by Lisa and Karen Mackey
"We visited the cemetery to pay respects to our deceased mother. Suddenly, as we prepared to leave, we were startled by a strange from the southwest corner of the graveyard --the loudest wolf whistle they had ever heard. We looked in that direction, and were startled to see a strange-looking elderly man staring at us  intently and making an obscene gesture with his hands."

April 7 1996 Statement by Sarah Dickerman
"While taking a walk through the cemetery for relaxation, I observed an elderly man at that southwestern rear part of the graveyard, kneeling on the ground and sobbing. I came to within a few yards of the stranger, he suddenly sprang to his feet, and burst out in a strange laughter. A second later, he called me a (expletive)
I quickly turned away and began to walk very fast towards my car and I could hear him alternately laughing and yelling, 'Catherine, Catherine, you (expletive)!' I was now panicked and ran terrified to my car. Upon reaching my car vehicle, I turned and saw in the distance, that the old man had returned to his original spot in the southwestern part of the cemetery. As I began to drive away, I saw the old man was now leaning over and beating with his fist a young woman lying prostrate before him on the ground. A moment later, both figures entirely vanished."

Palmer River Meeting House Cemetery
Mystery: Who's the boy who haunts the cemetery ? An apparition of a young boy dressed in clothing has been reported, as well as shadowy figures. There are claims of hearing a child crying out for help.

For the residents of the Palmer River area it was difficult to attend church worship at the Newman Church, which was a great distance away, a group of Palmer River residents petitioned the General Court  in Boston to divide the town in two precincts. In 1717 the General Court consented and a meeting house was constructed in that part of town. The Newman Church donated fifty pounds towards its construction. The Palmer River Meeting House and its burial ground were located on Lake Street. The Palmer River Church was founded on Nov 29 1721. On  March 8 1773 church members voted to demolish the meeting house and  construct a new one in the nearby, the present site of the Rehoboth Village Cemetery.