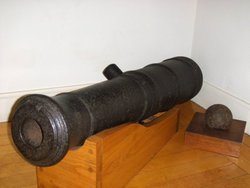 Tobias "Toby" Gilmore 1742-1812
Legend: According to legend, Toby rose in the ranks to the position of “body guard” or “body servant” of General George Washington. For his service, he was awarded a cannon, that today is housed at the Old Colony Historical Society in Taunton Mass. Every July 4th in celebration Toby would fire the cannon fourteen (14) times, thirteen (13) for the original colonies and the last shot in honor of General George Washington.

Tobias was born in coastal West Africa as Shibodee Turry Wurry, he was the son of a local Chieftain. Toby was kidnapped at age sixteen (16) by slave traders and was placed on the slave ship “Dove”. The ship was bound for Virginia, but due to a storm was forced to go to Rhode Island instead.  While in Rhode Island, Toby was auctioned off and was purchased by Sea-Captain John Gilmore of Raynham Mass. The Gilmores had their own children, but raised Shibodee, whose name was changed to “Toby Gilmore” as their own child. They taught Toby how to read and write. Toby volunteered for the Revolutionary War and began service on Dec 8 1776 as a Private in the 3rd Bristol Regiment. On Nov 4 1777 Toby joined the 12th Regiment.
On Sep 19 1777 to Sep 3 1780 he was enlisted for three (3) years. He was discharged from the army in Dec 1781 and returned to Raynham Mass.  After earning his freedom, Toby returned to Raynham Mass. and purchased land that had been confiscated from a British sympathizer, John Borland. After military service, Toby married Rosanna Hack and they had eight (8) children. Toby returned to work with his former master until he and his wife started their own housekeeping business. Gilmore died on April 19 1812 at age 70 and is interred at Hall & Dean Burial Ground in Raynham Mass. 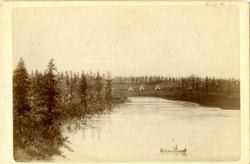 Fowling Pond
Legend: According to legend, Fowling Pond disappeared in 1793, and today is known as Pine Swamp.

The pond was two miles long, three-quarters of a mile wide and used swimming and boating. The answer has been discovered after some research. The pond was beaver-dammed (created by beavers) and once the beavers abandoned it, the natural process of silting up/vegetation growth and the release of the dam deteriorated made it seem as if the pond dried up.