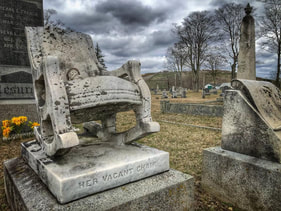 Rocking Chair Grave
Legend: There are several local legends about her death, some claimed she died after falling backwards in a chair, and another claiming she died in a house fire. Her death certificate was examined and her cause of death was confirmed to be meningitis. The chair doesn't glow in the dark either.

Pearl E. French 1878-1882
This child-size rocking chair grave marks the grave of Pearl E French, who died of meningitis. The monument has an inscription "Her vacant chair". The chair is in cement and doesn't move.  The choice of an empty chair as Pearl’s grave marker can be explained by a popular poem about the heartbreak of childhood mortality published in a magazine in 1850 by Richard Coe, Jr. entitled "The  Vacant Chair."  Pearl’s grave marker reads "Her Vacant Chair" and is topped by a marble sculpture of a small Empire-style rocking chair. 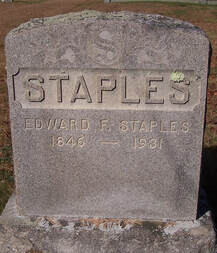 Edward F. Staples (1846-1932)
Legend: A Taunton resident was at President Lincolns Funeral ?
​
Private Edward F. Staples (19), from East Taunton, was a member of the 24th Michigan Infantry Regiment. The 24th Michigan regiment had been reassigned from the battle in Petersburg, Virginia and sent to the Illinois state capital to perform guard and garrison duty at a draft station. The 24th Michigan was later selected as the "principle escort" of President Lincoln's remains during the burial ceremonies
Edward was born in Boston, and at the age of three (3) his mother died, and his father dropped him off with his uncle, Caleb Turner, in East Taunton before heading to California for the gold rush.  In 1863 when he was 17-years old, Edward had a strong desire to join in the war effort, but because of his age and small stature army recruiters twice turned him down. Finally, in 1865, he decided to try again. Knowing that his uncle would object, Edward  traveled Detroit to enlist.
He was accepted into the service in February 1865 and was assigned to Company H of the 24th Michigan Regiment.
On May 3 1865 the funeral train carrying the body of Abraham Lincoln arrived in Springfield, Illinois after an all-night trip south from Chicago. For President Lincoln, Springfield was the last stop on the twelve-city journey to his burial.  On eleven occasions before arriving in the Illinois capital, Lincoln’s coffin was taken from the train and carried through the streets of major cities to an appropriate public hall. New York Times estimated that between Washington and Chicago, mourners who had paid their final respects to the president could be numbered in the millions.
The logistics of Lincoln’s burial in Springfield’s Oak Ridge Cemetery came under the direction of Major General Joseph Hooker.  After the casket was removed from the train, it was placed in an ornate hearse pulled by six black horses and brought to the Illinois State House, where the late president would lie in repose for twenty-four hours in the Hall of Representatives. On May 4 1865 at 10AM President Lincoln’s coffin was closed for the final time (*) and the funeral ceremonies began with a slow march to Oak Ridge Cemetery, located two miles west of downtown Springfield.
Due to President Lincoln's sudden death there was no time to construct a permanent memorial, therefore it was decided his body would be placed in the temporary receiving vault at Oak Ridge until appropriate monument could be constructed. The temporary tomb was embedded in the side of a hill within the cemetery. When the hearse arrived in front of the receiving vault, Lincoln’s coffin was removed, carried inside and placed it on a marble slab. Inside the vault was a smaller coffin. This smaller coffin held the body of William Wallace Lincoln, the president’s 12-year old son, who had died in Washington in 1862. Willie had accompanied his father on the long journey back to Illinois.
The last portion of Lincoln’s funeral was to have been a ceremonial rifle volley fired in the president’s memory by an honor guard from members of Company H of the 24th Michigan. Private Staples and his comrades had rehearsed military protocol for several days in advance of the ceremony, and there they stood in front of the receiving vault as officials made ready to finally close the doors. With rifles loaded and primed, Staples and the others stood awaiting the command to fire, but for reasons that were never explained — the order never came. The volley team was dismissed, its members returned to the ranks and the funeral ended, not with gunfire but in silence. After the funeral assignment, the 24th Michigan Regiment went back to duty at the draft station, where it remained until mustered out on June 30 1865. Private Staples was discharged from the army one week later and returned to 52-acre farm on Kingman Street in East Taunton.
On March 1 1932 Edward Staples died, and was interred in Thompson Hill Cemetery in Lakeville. The inscription on his grave stone is an error, records indicate he died on March 1 1932 not 1931 as listed on the stone.

(*)  In 1876 an unsuccessful attempt was made to steal Lincoln’s body from Oak Ridge Cemetery. Twenty-five (25)  years later, as the permanent Lincoln mausoleum neared completion, officials decided to open the casket once more to confirm Lincoln’s body was still inside. On September 26, 1901, a delegation of Springfield officials opened the coffin and confirmed Lincoln’s presence. It was then lowered into the ground and tons of concrete poured over it. Fleetwood Lindley, the young son of one of the officials, was present that day and became the last living person to have seen Lincoln’s face. He died in January 1963. 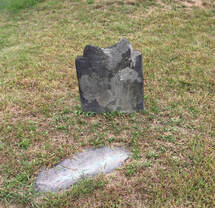 Polly Wilbore 1796-1796                                                                                            Legend : A little girls grave stops a highway contruction project
In January 1976 $10 million was approved of the construction of Route 495 extension that would take the highway from Mansfield through Norton, Raynham, Taunton, Middleborough, Rochester and connecting to Route 25 in Wareham.
The area was heavily forested and required clearing for the new highway. During the clearing phase
in the area of North Taunton, near Prospect Hill Street a single gravestone was discovered. The gravestone was of a child, Polly Wilbore. Polly was born on July 1796 and dead just five (5) weeks and three (3) days later.
Suspicion that the headstone might have been stolen from another cemetery and planted in the woods in an attempt to delay the construction of the highway. This idea was ruled out after locals came forward acknowledging the gravestone had been there for decades.
An archaeological team from Brown University was called in to evaluate the site.  As the archaeologists worked in the forest, other researchers viewed records held at the Bristol County Probate Court, while others studied genealogical information on the Wilbore family. The investigation took almost three years to complete.
Polly Wilbore was the daughter of Joseph and Hannah Wilbore, the fourth of six children born to the couple, and the only one to die in childhood. She lived on land that had belonged to her family for more than a century. During the early 1800's Joseph Wilbore sold his farm and moved his family to South Newbury, Ohio. Of Polly’s five siblings, four lived into their eighties, but it’s doubtful that any of them ever returned to visit the grave in the woods.
On February 28, 1979, a local funeral home, along with Medical Examiner's Office removed Polly’s grave from the forest. Her remains were moved to the Plain Cemetery in Taunton, where they were re-interred and the gravestone again placed at her head.