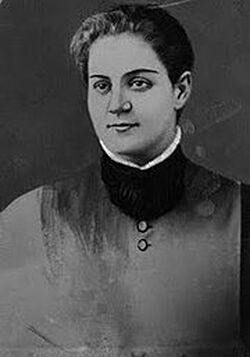 ​                                              Jane Toppan 1857-1938                                  Status: Homicide (31+)                   “That is my ambition, to have killed more people – more helpless people-than any man or woman has ever lived”
Jane Toppan (born Honora Kelley) was the daughter of Bidget and Peter Kelley.  Bridget, later died of consumption, and Peter, who was an alcoholic, and a tailor. Peter went insane at work and was institutionalized for attempting to sow his eyelids shut. Honora had an older sister, Nellie, who went insane in her 20's and was institutionalized.
In 1863 Peter Kelley requested the Boston Female Asylum to take the his two daughters – Honora (6) and Delia Josephine (8). It was determined the children were abused and neglected and thus allowed to remain at the asylum. Delia remained in the Boston Asylum until 1868 when she was placed as a servant in Athol NY at age 12. Later she turned to prostitution and died of alcoholism.
In 1864 Honora became an indentured servant to Mrs. Ann C Toppan of Lowell MA. Honora was never formally adopted, but changed her name to Jane Toppan. In 1874 Jane was released of her duties by the Toppan Family and received a $50 stipend. Although she was now released Jane remained with the Toppan Family for a decade and worked for her foster sister Elizabeth Brigham after Mrs.Toppan died. In 1885 Jane moved out of the Brigham household for reasons unknown. Jane began nursing training at the Cambridge Hospital. She became quite popular with the patients and acquired the nickname “Jolly Jane”.  She began to conduct “scientific experiments” on her patients by alternating different doses of morphine and atropine to examine the effects. By 1887 it is speculated that Jane had killed more than a dozen patients while working at the Cambridge Hospital.
In 1888 doctors at Cambridge Hospital gave Toppan glowing recommendation to further her nursing training at Massachusetts General Hospital. In 1889 Toppan was recommended for a job at Massachusetts General Hospital. While employed at Mass General Hospital she killed several more people before being fired in 1890.  Toppan then entered "private nursing", but the killings continued. In 1895 she poisoned and killed her landlord Isreal Dunham and in 1897 his wife, Lovey Dunham.  In 1899 she poisoned and killed her foster sister Elizabeth Brigham while at her vacation home on Cape Cod.
In 1901 Toppan lived with Alden Davis and his family in Bourne MA. She was hired to take care of Mr. Davis because his wife has died. Within a few weeks Toppan has killed Mr. Davis and his two daughters. The surviving members of Davis family requested a toxicology exam on Mr. Davis's youngest daughter. The report indicated she had been poisoned. Police began to look at Toppan as a suspect.
On Oct 26 1901 Toppan was arrested and charged with 4 counts of murder. On March 31 1902 Toppan confessed to eleven (11) murders and on June 23 1902 was found "not guilty by reason of insanity" and was committed for life in the Taunton State Hospital. While at Taunton State Hospital she was thought to have set fires to the main building more than once.
In 1902, After the trial, a letter was discovered that Toppan had sent to her defense lawyer (James S Murphy) claiming she had killed more than thirty-one (31) people. In an attempt to show that she was not without feeling, Jane claimed that the jilt she received from a lover in her youth seemed to be the root of all of her problems.
Toppan died at Taunton State Hospital in 1938 at age 81. Her body was disposed of in an unmarked grave in Mayflower Cemetery, section 34, where most of the Taunton State Hospital's patients were buried. The exact marker is missing; her grave number, 984, is on record at the cemetery department.