Russell Larrivee 1982                                 Status: Solved
Inside the state forest, Russell Larrivee (19) was stabbed and beaten with a rock and subsequently covered with leaves to hide his body. The perpetrator Peter Vailancourt (22) and Jason Johnson (22) took the victims shoes, which caused frostbite, resulting in the amputation of Larrivee's legs.
The perpetrators were arrested and charged accordingly. Vailancourt plead guilty to the murder, was sentenced to 18-20 years in prison. Johnson was found guilty and sentenced to 25 years in prison.
Judith Szatek & Raymond Frenette 1965                        Status: Solved
On May 1 1965 Judith (21) & Raymond (21) were parked down a deserted dirt road 150 feet off Bullock Road just two (2) miles north the Dartmouth town line., The couple was engaged and were both enrolled in college, Judith at Fitchburg State, and Raymond at SMTI (now UMass Dartmouth). For reasons unknown Judith was shot three (3) times in the chest and Raymond was shot four (4) times in the head. The vehicle had multiple bullet holes along with the windshield and door window were shot out.
Seven (7) .22-caliber shell casting were recovered from the scene. Robbery was ruled out as a motive, since both Judith and Raymond still had a small amount of cash and their personal belongings.
The couple was seen entering the deserted roadway at approximately 7PM the night they were murdered. Their bodies were discovered the next day approximately 12:30PM. The medical examiner determined the time of death was 10:30PM. The investigation determined that Judith was struck by a bullet that came thru the windshield, Frenette while exiting the vehicle was struck in the head several times. The killer then shot Judith two more times as she lay injured inside the vehicle.
On May 6 1965 Robert Garron (19) of Berkley was arrested and charged with murder. Investigators working with Taunton Police were about to obtain information from a co-worker of Garron. Garron's vehicle was impounded, and according to an eyewitness was seen leaving the crime scene area. Garron was committed to Bridgewater State Mental Hospital for 35-days for evaluation.  On April 29 1966 A just deliberated for 45-minutes resulting in Gerron being acquitted by reason of insanity. 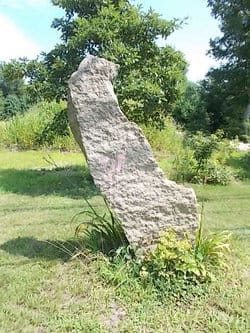 Isaiah Bullock 1862                              Status: Solved
Originally Slab Bridge Road ran from the Dartmouth line to the Assonet Village. The road was renamed after 1862 as a result of a murder.
On June 19 1862 a local saloon keeper by the name Isaiah "John" Bullock (1816-1862) was attacked and murdered while delivering a 20-gallon keg of liquor. Obed Reynolds a 17-year old from New Bedford was looking to steal a few dollars from local delivery peddlers.While under the influence he sat and waited and along came  Mr Bullock, who was on his way home after making his delivery of the keg.
Around 7PM Mr. Reynolds shot Mr. Bullock in the face with a shotgun. however it didn't kill him, he fought back. A physical altercation ensued resulting in Mr. Reynolds stabbing (25 times) and beating Mr Bullock with the shotgun.
Mr Reynolds then stole a watch and clothing.
Mr. Reynolds was captured and went on trial in Taunton Superior Court. On May 21 1863 he was found guilty of 1st degree murder, and the penalty was death by hanging. While waiting sentence in a New Bedford jail, he learned to read and write. He wrote letters admitting to the crime, but stating he was driven by a combination of rum and gunpowder.
On January 7 1864 Massachusetts Governor John A Andrew commuted Mr. Reynolds sentence to life in Charlestown State Prison, where he died on Apr 4 1876 from tuberculosis. Obed Reynolds is buried in the Pine Island Cemetery in Dartmouth.
Located on Bullock Road, a sickle-shaped piece of granite juts from the ground marking the place where Mr Bullock lost his life.  The stone without inscription or marking is located just south of Pierce Way East on Bullock Road. It was at that time in 1862 that this section of Slab Bridge Road was renamed Bullock Road. The monument was erected by those who lived along the road, not long after John Bullock died, to mark the spot of his murder. Mr. Bullock is buried in Pine Grove Cemetery, New Bedford Section F Lot 34. 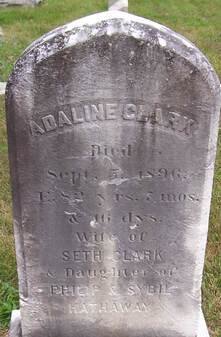 Adaline Clark 1856 Freetown                                Status: Solved
On September 22 1856 Adaline (Hathaway) Clark shot and killed David S. Hathaway Jr. He was a farmer, and was Adaline's first cousin. At the time of the murder, Hathaway was living with Adaline and her husband Seth.
The Taunton Gazette reported that Hathaway came home extremely intoxicated, and an argument ensued, which  escalated into an axe attack.  Adaline explained she’d gone to bed and was roused sometime later by the noise made by the intoxicated Hathaway who was attempting to get inside the locked back door. Adeline took an oil lamp to guide her way to the kitchen and let Hathaway inside. He took the lamp from her and shoved her outside into the rain. While she pounded and pleaded to be let back in, Hathaway guarded the door, axe in hand, and vowed he’d use it if
Adaline reentered the house. After spending an hour and a half outside in her rain-soaked clothes, She stated she heard a chair tip over, then a thud which she assumed was Hathaway falling down. Once gaining entry into the house, she retrieved a pistol she had bought a week prior. By the lamp light in the front room, she saw Hathaway on the floor with the axe beside him. She claimed he reiterated his threat to kill her and “two or more of her children.” At that moment,  Adaline shot Hathaway in the head.
Adaline claimed self-defense in explaining the events. During the investigation Adaline disclosed she had been Hathaway's mistress.
Authorities determined Adaline's account of the shooting and the advance planning that went into it, were cold and calculating and premeditated.  In April 1867 Adaline was went to trial charged with manslaughter. In May 1858 she was convicted, but not sentenced until October 1858. She was sentenced to five (5) years of  hard labor in the New Bedford House of Correction. In June 1863 she was released.

What happened to her husband, Seth Clark?
At some Seth Clark quietly leaves Freetown and moves to Rhode Island. Due to the publicity of his wife, commuting adultery with her own cousin, and now a murderer was a huge burden and an embarrassment.
In 1865 Adaline is listed as living in Freetown with her adult son, and she claimed she was a widow, which was untrue. In 1880 Adaline claimed she was divorced from Seth, but that too was untrue. Seth was alive and well living in Rhode Island, but listed himself as being a widower, also untrue.
Seth died in 1892 at age 82, Adaline died in 1896 at age 82 - even more shocking, Seth and Adaline are buried next to each other in the Assonet Burying Ground.


Who was John Tisdale (1614-1675) ?
John Tisdale (1614-1675) came from England in 1634 to Plymouth Plantation. In March 1643 sold his land in Duxbury and moved his family to Taunton. He built his home on the east side of the Great River at Assonet, about three and one-half miles from Taunton Green, and bordering what is now Berkley.
In June 1645 John was appointed Constable of Duxbury. In 1650 was named a selectman in Taunton, and in 1655 served at Constable.  In 1658 he was again elected Constable and also selectman of Taunton. In 1659 he and twenty-five (25) others organized "Yee Freeman's Purchase" and bought, from the Wampanoag Indians, the settlement that was known as Freetown. The purchase price included coats, rugs, pots, kettles, shoes, hatchets and cloth. Tisdale was again voted as selectman in 1672 (and 1675) and in 1674 he was a representative of the General Court at Plymouth.

Tisdale Burying Grounds
The burying ground is a revolutionary-era cemetery and contains 32 graves. The cemetery currently is located within the boundaries of the Porter Pasture conservation land. Most of the Tisdale Family are buried in the cemetery.  Interesting to note, the grave of Joshua Tisdale (1646-1718) is marked with a large gray stone, however his name nor dates are engraved on it.  It only says "He lies the body of".