One of the oldest ghost stories in Fairhaven is the tale of the "Women in White" In the late 1970's.  As the story goes, several people were present the night she emerged from the waters at the West Island Town Beach. She first appeared in the 1960's and usually appears around the beginning of June, mostly on foggy nights.
The largest group of witnesses to her appearance was in 1971 or 1972 when she appeared during a Fairhaven High Class party on the east side beach known as Crescent Beach. She walked down Crescent Beach from Monastery Rock, barely noticed at first. When she reached the small dirt road connecting the parking lot and the beach some of the group began to see her, not giving much thought to her presence. Wearing all white, she was dressed in a flowing sort of robe. The story also claims supposedly she drowned, or WAS drowned at Crescent beach and would leave the scene of her demise (the sea), perhaps in search of her lover who committed the foul act.
There is also the supposed Marsh Men who appear farther down towards Bass Creek in the marsh between Monastery Woods and the woods on the West side of the marsh. They travel back and forth between the two woods toiling away the night. It has never been known why they carry out their tasks or what they were carrying, if anything, and which way they were moving their goods, east to west or west to east, as no one was ever successful in sneaking up close enough. They can be seen on any random night in the summer as dimly glowing silhouettes when the fog rising up through the marsh grass cloaks their endless drudging, back and forth and if you get close enough, you can hear their feet sloshing through the mud. 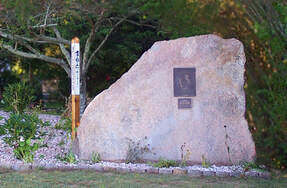 The boulder was installed in 1958 to mark the place approximately where Captain Joshua Slocum rebuilt an antiquated oyster boat, Spray. The small vessel had been given to Slocum by Poverty Point resident Capt. Eben Pierce. Slocum began his rebuilding of the Spray in 1891 and launched his fully overhauled vessel on June 21,1892. Slocum began living aboard the Spray.
On April 24 1895, Slocum set sail from Boston on a three-year voyage around the world. When landed in Newport, R.I. on June 27 1898, Slocum became the first man to have sailed around the world alone. On July 3 of that year, he sailed the Spray back to her birthplace in Fairhaven. Slocum’s book Sailing Alone Around the World, first published in 1900, is still in print.
In 1901 he purchased a small farm in West Tisbury on Martha’s Vineyard, after a year and half he didn’t like the quietness and went back to sailing. By 1909 Slocum’s funds were very low and he prepared to sell off the house on Martha’s Vineyard. On November 14 1909 Slocum set sail for the West Indies for his usual voyage. He was never heard from again, In July 1910 his wife informed the media that she believed he was lost at sea. Joshua Slocum was declared legally dead in 1924.
John Cooke 1607-1695
Mystery: Where is John Cooke buried ?

In July 1620, John Cooke sailed from Leyden, Holland on the Speedwell, the smaller of two ships bound for America. The Speedwell sprung a leak and was deemed unseaworthy, he as transferred to the larger ship, The Mayflower.
Cooke was one of the 36 people who purchased the Old Dartmouth territory in 1652 and finally moved from Plymouth to Dartmouth around 1662.
Cooke was one of the most prominent men during the early days of Dartmouth.  In 1667, he was authorized to perform legal duties, such as officiating marriages, issuing warrants and administering oaths. He was appointed twelve times as Representative to the Court at Plymouth between 1666 and 1686 and also served as a selectman nine times between 1670 and 1683, with consecutive years broken only by the destruction of town during the King Philips War.
Cooke had large land holdings, In 1666, he bought “Howard’s Neck” in Acushnet from Joseph Russell. Cooke owned West Island, which he bought from Wampanoag leader “King Philip” for £10. In 1672, the town gave Cooke Popes Island, then known as Ram Island, as payment for services. He also owned property called “Freemans Meadows” in Rochester.
Cooke’s house was rebuilt after the King Philips War and was the house later occupied by his grandson Bartholomew West when the British burned it 103 years later during the Revolution in September 1778. The house was never rebuilt. At that time the family Bible was stolen and today it is on display in England.

John Cooke Garrison 1675
Cooke’s homestead was located between Riverside Cemetery and Woodside Cemetery, with his house overlooking the Acushnet River. Between his home and the river, he built a garrison, as a defense against attack by Indians.
In July of 1675, at the start of the King Philip War, the town was raided by Wampanoag warriors who were followers of King Philip. Cooke’s garrison became a refuge for local settlers. All thirty houses in Dartmouth, including Cooke’s, were destroyed. The town was abandoned for about three years following the attacks.
Walls from the garrison remained visible into the late 1850s. An excavation of the site around that time yielded arrowheads, spoons, cooking utensils and other artifacts which were eventually donated to the Old Dartmouth Historical Society. John H. Howland donated the garrison lot on Howland Road to the Town of Fairhaven in 1903. The marker was installed by the Fairhaven Improvement Association in 1908.
The wording of the plaque has two errors. Cooke was the last male passenger of the Mayflower, but another original Pilgrim, Mary Allerton Cushman, was still alive after Cooke’s death. Additionally there were other men living and paying taxes here before Cooke’s arrival; he was not Fairhaven’s first white settler.
John Cooke Memorial Park (1903) is located on Pilgrim Avenue, and according to a lecture in 1888 by Franklin B. Dexter, it's suggested that John Cooke’s remains were buried at the site. There is no records of any documents supporting this claim.  A boulder with a bronze plaque was installed in the park by the Fairhaven Improvement Association in 1903.
However, the park is part of an area that had been referred to as a burial ground from the 1760s into the 1800s, there are no records confirming any burials.
There is some evidence that suggests Cooke was more likely have been buried on Hathaway property in what is now Acushnet. His actual burial place is unknown.