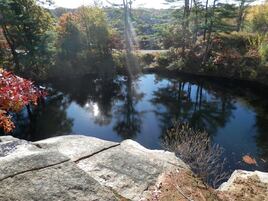 Marni Roy 1986                                    Solved 2010
On March 4,1986 Marni (Larkin) Roy (19) disappeared while walking her dog on Slocum Street in Acushnet.  After she vanished police conducted an extensive ground and air search to no avail. Shoes and socks belonging to her were recovered in a culvert.  Robert Roy, her estranged husband, never participated in searching for Marni and the case went cold. Robert Roy was the last person to see Marni before she disappeared. They had met in a field her Marni's mothers home in Acushnet the day she disappeared.
On March 6 1986 Marni's mother and sister discovered her shoes and socks in a culvert near the field. A missing person report was filed with the Acushnet Police Department that day. On March 10 1986 the police finally made contact with Robert to question him regarding the missing person report. he admitted he met her in the field, by he claimed Marni told him that she was going to Florida with another man.
During the investigation police tested Robert's jacket and pullover sweatshirt similar to the one the victim wore the day she disappeared that was discovered in the woods a month after the victim disappeared.
On March 30 1986 Robert asked a friend to assist him with moving some stuff, after telling this friend he was moving to Florida. A rolled up rig was placed in the bed of the the friends truck and they drove the the Dartmouth ledge off Route 6 and tossed the run into the water and waited until it submerged. At this point Robert threatened to kill the friend if he every spoke of the event. Robert did go to Florida for a short time and returned back and he admitted his role in Marni's death to another two (2) people.
In April 1990 discovered skeletal remains in the water-filled quarry in Dartmouth. The remains had been weighed down by cinder blocks. It was later determined the skeletal remains were Marni Larkin Roy. The cause of death was fractured skull.
Prior to Marni disappearing Robert had many run-ins with law enforcement. In Jan 1986 Robert was arrested for assault and battery on police. In 1992 he was charged with sexual assault and was convicted of rape. In 1997 he plead guilty to charges of assault and battery from 1988 and was sentenced to two years in jail.
In 2007 two witnesses came forward and provided information to law enforcement that resulted in the arrest and conviction. On Oct 9, 2007 he was arrested and charged with first degree murder in connection the Marni's death.
On Feb 25, 2010, after a 21-day trial, Robert Roy (46) was found guilty of murder with extreme atrocity or cruelty. He was sentenced to life in prison with no  possibility of parole. Evidence presented at trial showed Robert had lured Marni into a field in Acushnet and killed her.  Robert then dumped her body in the quarry, tying her remains to cinder blocks. Remnants of the clothes she wore the day she vanished were recovered with the remains. Marni’s DNA was recovered from a blood stain on a denim jacket worn by Robert. The DNA sample matched that of a DNA sample taken from a postage stamp on a letter that Marni sent to a friend a year before she vanished. The letter was given to law enforcement in 2007.
In 2013, Robert appealed his conviction, however the court ruled there was no reason to reduce the sentence or order a new trial. He remains in prison. 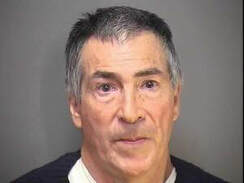 David Taber
Albert Ford Middle School Shooting 1993                         Solved
On April 14 1993 David Taber set his Acushnet residence on fire and then drove his red van to the Ford Middle School armed with a 12-gauge shotgun.  As he entered the school he encountered Principal John Tavares, Librarian Alice Olivier and Nurse Carole Day and proclaimed "This is a hostage situation". At this point Nurse Day looked at Mr Taber, and turned away and she was shot and killed. The Principal and the Librarian were told to leave the office and began walking down the hallway. During the walk, it appeared Mr Taber didn't have full control of the weapon and the Principal then grabbed the weapon and a struggle ensued. During the struggle another teacher heard the commotion helped pin Mr. Taber to the ground. Once Mr Taber was subdued in the hallway, Tavares seized the weapon and returned to his office to call 9-1-1. Mr. Tavares suffered two (2) broken ribs during the struggle with Mr. Taber.
Mr Taber was arrested and charged with murder, kidnapping and assault. He was ordered to undergo a psychiatric evaluation at Bridgewater State Hospital. At trial in 1995 Mr. Taber was found not guilty of murder by reason of insanity, but was convicted of arson, kidnapping, and assault and battery with a dangerous weapon. He was sentenced to serve 40 years in prison. In 2015 Mr Taber was released for good behavior and went to reside with his father in Acushnet.

David Taber 2017 Arrest
On May 25 2017 David's elderly father Alton Taber presented himself at his doctors office in Dartmouth seeking medical attention. Mr Taber had injuries that appeared to be from an assault were serious and he needed to be transported to St Lukes Hospital. Alton Taber reported the assault took place on May 23 by his now 66-year old son David at their Lake Street Acushnet home. The Dartmouth Police were notified of the incident and notified the Acushnet Police. David Taber was now wanted for seriously assaulting his 88-year old father.
On May 25 2017 around 6:40PM Acushnet Police attempted to stop David Taber as he left his Lake Street home. Mr Taber made an attempt to allude police by turning into a different driveway, making a u-turn and accelerated his vehicle over the lawn, through several shrubs and striking a police cruiser head-on, totaling both vehicles. The officers received minor injuries, David Taber refused medical treatment.
Dave Taber was now charged with Assault & Battery on a family member over 60, Assault & Battery of a disabled person with injury over 60, intimidating a witness, failure to stop for police, Two (2) counts of Assault & Battery with a dangerous weapon, negligent operation of a motor vehicle, and resisting arrest.
In July 2018 David fired his second lawyer as the trial was to begin, a trial is still pending.
On December 4 2018 Alton Taber died at age 90.