Solved Murders
Why write about solved murders ? Why do they matter anymore ? Well, they do matter. These murders are forgotten and lost to history but are significant today. Perhaps the person(s) involved, the location of the murder, or even the murder itself is noteworthy.

Unsolved Murders
These crimes should never be forgotten. Today, as time goes by and leads dry up, official resources are often diverted to newer cases. Over time these cases become stagnant and are not able to be actively investigated. The passage of time sometimes helps with for new information. Relationships deteriorate, friendships wane, people find religion, guilt sets in, people talk. All of these factors can result in “new” sources of information. Although we frequently hear of old cases being solved, it is usually a result of DNA advances, not active investigation. Family members have been waiting years and decades for answers to how and why their loved ones have been murdered. These families have been patient throughout the years, only to be told "we are working on it". The system has no way of proving law enforcement is even trying to solve these cases.
The Southcoast area has 92 unsolved murders from 1975-2017. New Bedford has the most unsolved at fifty-one (51), Fall River has ten (10), Taunton and Westport each have five (5), Dartmouth has four (4), Fairhaven, Berkley, Rehoboth have two (2), and finally Swansea and Seekonk each have one (1).

Serial Killers
The Southcoast area has a history of having a few serial killers. The F.B.I. defines serial killings as: "A series of two or more murders, committed as separate events, usually, but not always by one offender alone". Most serial killings involve sexual contact with the victim(s). The motives of serial killers can include anger, thrill-seeking, financial gain, and attention seeking. The murders may be attempted or completed in a similar fashion. The victims may have something in common, for example, demographic profile, appearance, gender or race.​

Historical & Legends
History is a study of documented past, verified by facts. Having a knowledge of historical people, places and events can be beneficial to an individual as well as the community so they become aware of their roots. The Southcoast area is very rich with several different types of history, from Native American to Whaling and beyond. Our goal isn't to repeat boring history, but to make it interesting.
The Southcoast area has many legends. These legends are stories that are perceived to be true, but not validated by verified, factual evidence. Legends are often linked to an event or a place. By sharing legends is keeps the story alive.

Mysteries
Mysteries are something that is a secret, something that has no clear explanation, or something difficult to understand or explain. Mysteries can be unsolvable such as paranormal activity.

Psychologically Impacted Home Disclosure
Massachusetts General Laws Chapter 93 Section 114 : ​Massachusetts Real Estate Transactions; disclosure; psychologically impacted property
The fact or suspicion that real property may be or is psychologically impacted shall not be deemed to be a material fact required to be disclosed in a real estate transaction. “Psychologically impacted” shall mean an impact being the result of facts or suspicions including, but not limited to,  the following:
(a) that an occupant of real property is now or has been suspected to be infected with the Human Immunodeficiency Virus (HIV) or with Acquired Immune Deficiency Syndrome (AIDS) or any other disease which reasonable medical evidence suggests to be highly unlikely to be transmitted through the occupying of a dwelling;
(b) that the real property was the site of a felony, suicide or homicide; and
(c) that the real property has been the site of an alleged para-psychological or supernatural phenomenon.

​     No cause of action shall arise or be maintained against a seller or lessor of real property or a real estate broker or salesman, by statute or at common law,  for failure to disclose to a buyer or tenant that  the real property is or was psychologically impacted.  Notwithstanding the foregoing, the provisions of this section shall not authorize a seller, lessor or real estate broker or salesman to make a misrepresentation of fact or false statement. 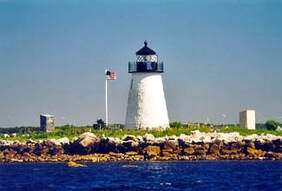 Bird Island Lighthouse
Mystery : The island, located in Marion, is said to be haunted since the death of Mrs. Moore. According to an article in the Standard Times, reports from later keepers were frightened by the “ghost of a hunched-over old woman, rapping at the door during the night.” Subsequent keepers had similar experiences and one even claimed his children were repeatedly frightened by the spirit of a "stoop-shouldered old lady" with one arm extended as though reaching out for something.

The Story Begins in 1819
A lighthouse was constructed on the 2-acre island off the coast of Marion in 1819 with William Moore assigned as keeper on September 1 1819. He remained the keeper until 1822.
In 1822 the body of Mrs Moore was discovered. Her husband suggested she had "succumbed from nicotine" as she did have a fondness for tobacco, but she officially died from tuberculosis. After the death of his wife, Mr Moore was assigned to the new Billingsgate Lighthouse near Wellfleet and remained there until 1830.
In 1899 the original keepers dwelling was torn down. Oddly, during the demolition a rifle, a bag of tobacco and a note signed by William Moore was discovered.
The note said "This bag contains tobacco, found among the clothes of my wife after her decease. It was furnished by certain individuals in and about Sippican. May the curses of the High Heavens rest upon the heads of those who destroyed the peace of my family and the health and happiness of a wife whom I dearly loved."
​  In 1933 the construction of the Cape Cod Canal and illuminated buoys led to the lighthouse being deactivated. The dwelling that was attached to the lighthouse along with other structures were destroyed in the 1938 hurricane. The U.S. Government declared the land surplus, and in 1940 sold it at auction to George Harmon of Maine for $654. A month later the island was purchased by Augustus Fiske of Rhode Island.  The Town of Marion purchased the island in May 1966 from Mr. Fiske’s heirs for $2,500 and remains the current owner. The light was reactivated as a Private Aid for Navigation on July 4 1997. 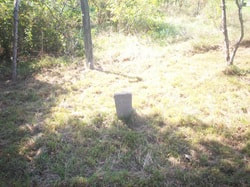 East Freetown Cemetery 1924
Mystery : There is a gravestone marking the site where a woman named "Irene" who was known as the "woman with twenty dogs" is buried. Irene came from Vermont and had died of a sudden heart attack while walking on the lane way while living with the occupants of the farm. When Irene passed away her 20 dogs became feral and began killing livestock. Farmers were forced to kill the dogs, but they gave the dogs proper burial, next to "Irene".  Irene's last name remains unknown.

On October 1 1924 the two-acre parcel was donated to the Town of Freetown by Charles Chace for use as a cemetery.  The cemetery was then named "East Freetown Cemetery".  In the 1930's and later, the southern section of the cemetery was used as a burial ground for paupers. There are two (2) burials from the 1930's and three (3) unknown marked burials. There is no information on who who buried here. Lots were made available for sale in the 1950's and 1970's, but none were purchased. In 2013, lot sales and burials commenced.

In honor of those who served.