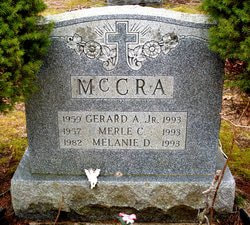 McCra Family 1993                                            Solved 1993
On October 9 1993 Gerard McCra III (now known as Kuluwm Asar) (15)  shot and killed his father, mother and 11-year old sister family, after a heated argument with his parents about having his girlfriend, Yolanda Wilbur, sleep over at their Rochester home.
He broke into his grandfather's quarters in the house that they shared and took a gun which he checked to be sure it was loaded. Later on in the day, while his father and his sister were about to leave in the family vehicle, he asked to accompany them. He then went inside the house, shot his mother in the back of the head, returned to the waiting vehicle, and shot his sister and his father each in the back of the head.
He drove the vehicle to an area behind the house and moved his mother's body into his sister's room, locked the door, attempted to clean the bloodied areas, showered, and changed. With the bodies out of view he invited his girlfriend to visit him, which she did, and they spent the night together in his room.
​

October 10 1993 Family Reported Missing
​ On October 10 1993 McCra III, his two aunts, and several cousins went to the Rochester Police Department to report the family missing. Two hours later, the police went to the house, noticed a broken window and numerous red stains throughout the house, which the McCra III explained as being caused by his sister's painting birdhouses red. After several hours the police found the victims' bodies and soon thereafter McCra III admitted to being involved in the killing of his family and was placed under arrest.  On October 23 1995 Gerard McCra III, was convicted on three (3) counts of 1st degree murder and was sentenced to life in prison.

U.S. Supreme Judicial Court Ruling 2014
The U.S. Supreme Judicial Court ruled that juvenile life sentences without parole are unconstitutional. The SJC ruling was based on scientific evidence that lifelong imprisonment is cruel and unusual because juvenile brains are "not fully developed."
Teen killers then became eligible for parole after serving 15 years in prison.  The move sent states into a frenzy as each laid out its own version of the law. In Massachusetts, juveniles convicted of pre-meditated murder are eligible for parole after 25 years.

May 30 2019 Parole Hearing
The parole board, which consists of six appointed members, asked McCra about his progress in prison. He said he is a changed man and converted to Islam. A forensic psychologist said McCra was not a danger. Many community members have sent letters to the parole board opposing McCra’s release.
McCra’s paternal grandmother, Ruth McCra, testified in support of her grandson. She said he was troubled due to physical abuse from his parents and taking the medication, Ritalin, on and off.  McCra also said he was sexually abused by his neighbor and his parents did not believe him.
On March 11 2020 His request for parole was denied, and will be eligible to go before the board again in five (5) years, at age 46.