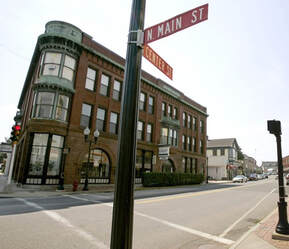 On April 13 1925 Katherine H Cooke (41) was murdered by her husband Napoleon J Cooke at their North Main Street apartment. The Cookes emigrated from Canada, thru Vermont and finally came to Middleborough. They opened a small restaurant which they relocated a short time after their arrival to the Nemasket House hotel on North Main Street.
Katherine returned home just after 12PM on April 13 to run errands for Mrs. Sarah Matheson, her neighbor who was confined to her apartment due to the measles. As Katherine  was returning from the post office and climbing the stairs, she was met by her husband standing in the open doorway of their apartment. Raising a revolver, he pointed it at his wife, and fired point blank.  The first shot missed and struck the wall, and Katherine fell, breaking her glasses and scratching her face. Cooke's second shot missed as well. Katherine tried to make her way to Matheson's apartment, However Napoleon dragged her through their apartment, to the bedroom and shot her in the head, killing her instantly.
While Mrs. Matheson, shocked by the shots in the neighboring apartment, shouted for help, Cooke fired two additional shots - one into his side, and one into his head. Middleborough Police Chief Alden C. Sisson and Patrolman Alton R. Rogers arrived at the scene along with doctors Edward Perry and C.S. Cummings. The doctors pronounced Katherine Cooke deceased and had little hope that Napoleon would survive.
Napoleon regained his senses, asked for water and was rushed to the hospital. Napoleon was arraigned on the murder charge on April 22 1925. Judge Washburn ordered a plea of not guilty to be entered on his behalf, and to be held without bail at the Plymouth County House of Correction.
In June 1925 Napoleon was indicted by the grand jury.  In accordance with the law, Cooke was then examined by two psychiatrists who found him to be not of sound mind, and he was committed to the State Farm at Bridgewater for the criminally insane.  Twenty-three (23) years later in August 1948 Napoleon was transferred from Bridgewater to the House of Correction to standing trial for his actions from 1925. It was believed he was competent to stand trial.
District Attorney Edmund R. Dewing dropped the murder charge, and entered a charge of manslaughter, a lesser offense. Judge Frank E. Smith presided and the few witnesses then still alive testified to the recollections of an event nearly a quarter century earlier. On October 28, 1948, the jury found Cooke not guilty by reason of insanity.