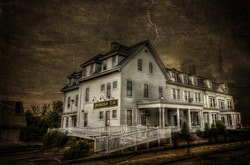 The club was organized on Nov 22 1894 by a group of nine (9) men.  At their first meeting it was decided to purchase property to use as a clubhouse. They purchased the 1861 William Mason Estate on No. Main Street in Fall River on Dec 19 1894.
The house was completely renovated and enlarged to its present size. In 1910 the Dining Room was expanded and the Billiard Room (now known as the Mt Hope Room) was enlarged.
In Jun 1919 The club purchased land next door, after renovations and additions the "Ladies Annex" opened in Jun 1920. This building is now  known as the "Priscilla Room".  Some of the original furnishings are still in use, such as the grandfather clock at the main entrance which is dated Jul 1 1895. Feb 18 2012 The club closed. New owners have taken over and after months of work unearthing the architectural beauty of the former William Mason estate they have reopened in Nov 2012. The two-lane bowling alley has been restored which is where East Coast’s oldest bowling league started in 1911. 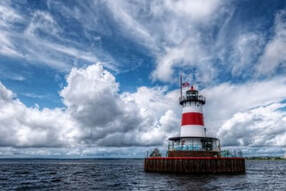 Bordon Flats Lighthouse
Mystery: Visitors and owners, have heard the sounds of a little girl giggling, a man whistling and waves of classical music drifting at night through the lantern room. There have been numerous occasion of hearing a "thud" on the floor below, or the sound of people coming into the lighthouse while you're working upstairs, only to find that no one is there.

The lighthouse was constructed  in 1881 and is located in the Taunton River / Mount Hope Bay, Fall River Massachusetts. During the early days of the industrial revolution, Fall River became known as the world leader in textile productions. The became destination for large steam liners from destinations such as Boston and New York. Due to a large under water reef at the entrance to the Taunton River, a lighted day marker was places atop the obstacle, only to prove obsolete for night commerce.  Congress appropriated funds for the construction of the cast iron, "spark plug" style lighthouse. On October, 1 1881 the lighthouse became active with a fixed red light.
The U.S. Lighthouse Establishment held keepers at the lighthouse until the U.S. Coast Guard was created in 1939. At that point, the USLHE was eliminated and the station became staffed by a full time Coast Guard officer. In an effort to save costs, the lighthouse was fully automated and destaffed in 1963. The lighthouse was deemed surplus by the U.S. Coast Guard and was offered through the National Historic Lighthouse Preservation Act (NHLPA). No entities applied, so it was sold into private ownership in August 2010 for $56,000 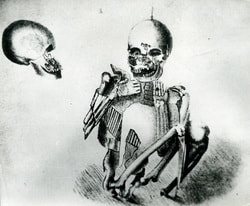 The mysterious “skeleton in armor” was found near Hartwell and Fifth Streets in 1831. The skelton was discovered by Hannah Borden Cook, a young housewife, who was gathering sand from a hill ; the hill gave way and revealed a human skull. Ms. Cook returned with investigators who then unearthed the skeleton of a young man who
had been placed in a sitting position in a crude grave about a foot beneath the ground.
The body was in a double coverings of course, dark bark which were taken away, revealing a brass breastplate, and a brass belt. The brass belt consisted of brass tubes strung together and used for protection below  the breastplate. Laying beside the body was a quiver of arrows, which disintegrated in the air.
The skeleton and armor was transported to the Fall River Atheneum, a private library, located in the Town
Hall,which was destroyed by the Great Fire of 1843. All that remains are pieces of the brass belt. Two pieces of the brass tubes from the belt were donated to the Peabody Museum in 1887. The origin of the skeleton in unknown. 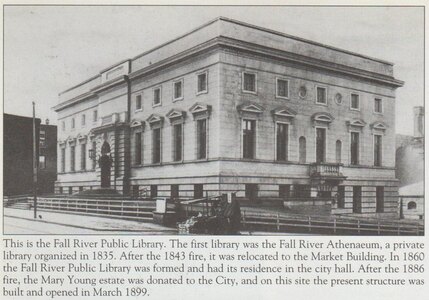