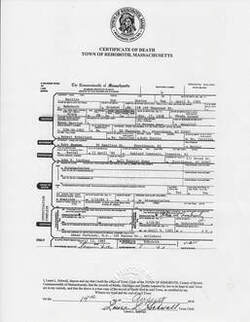 Marilyn Burton 1985           Status: Unsolved Homicide
On April 9 1985 the body of Marilyn Burton (29) was discovered in a wooded area of Rehoboth. Autopsy confirmed the cause of death to be strangulation and she had been deceased three (3) weeks prior to being discovered.
Burton was from Providence R.I., and was reported missing to the Providence Police on March 16 1985. Burton had a record of prostitution arrests dating to early 1975 and was known on downtown streets as "Suzie."  At the time of discovery he body was fully clothed, and it was not possible to determine if she had been sexually assaulted.

​August 15 1978 Diane McKeller (14) Providence prostitute was found strangled to death in a shallow grave near a home under construction in Lincoln R.I.

June 3 1980 Roseanne Robinson (17) Providence prostitute was found strangled to death in a field near Lincoln R.I.

December 5 1985 Janine Callahan a store clerk , whose naked body was discovered in Burriville R.I.. The cause of death is unknown, she is the only one of the eight not identified not as prostitute.

Aug 9 1986 Shawn Donahue (25) was found shot to death and her throat slit in a parking lot in Providence R.I. Witness claimed She was last seen entering a van hours before her body was discovered.

June 20 1987 Rhoda Travers (26) was found dead in Warwick R.I. She had been arrested for prostitution just six (6) days prior to being discovered dead. Witness claimed she too was last seen entering a van the morning of her death.

August 14 1987 Barbara Butts (19), a Providence prostitute was found rolled up in a discarded rug on the side of the road in Seekonk. The cause of her death is unknown.

September 16 1987 Lillie P. Jones (30), a Providence prostitute was struck by a vehicle on I-95 in Attleboro. Police say she may have been intentionally struck. Family reported information claiming Lille was last seen entering a van. ​​