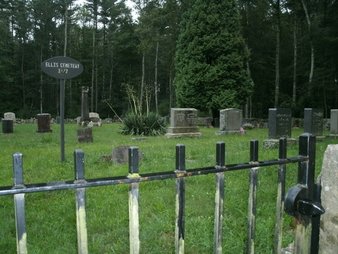 Ellis-Bolles Cemetery
Legend: During King Philip’s War, the forest areas of Rochester and Mattapoisett were used as a hiding point for both sides. It’s alleged that near where the cemetery now stands, there was an ambush and the captured prisoners were subsequently hanged from the trees on Wolf Island Road. It’s not known whom or what side suffered the hangings and there is no proof such an event occurred.

Legend: The second legend speaks to the roadway and not the cemetery. In the 1970s a carload of teenagers were cruising around in a Ford Mustang and went speeding down the road. An accident occurred when the driver crashed into a tree and instantly killing all the occupants. The legend continues, if you drive onto Wolf Island Road, park your car and blink your headlights three times, off in the distance you will see another pair of headlights blink back in your direction, before you hear the loud roar of a Mustang’s engine and see the headlights speeding toward you.  There is no documentation supporting these legends, and no record of such a fatal crash.