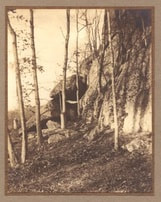 Abram's Rock
Legend: According to legend, Abram was given a chance to keep his life, he was sentenced to death but if he jumped three (3) times from the rock and survived his life would be spared. Abram took the chance, and the jumps began. The first and second jumps were a success; however he landed on top of the trees and was killed.

In the northern end of town there is a large boulder with an interesting legend. "Abram" a poor Wampanoag Indian who had deserted his tribe, coming into the settlement of Swansea where he lived in peace. King Phillip wanted Abram to rejoin the Wampanoag Indians but was afraid of Abram's relationship with the white settlers. Abram lived at the rock for several months until he was captured. The west side of the rock forms a cavern which today is called  "Abram's bedroom".