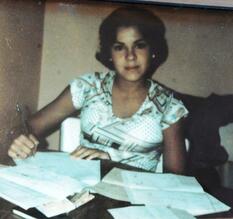 Mary Lou Arruda 1978                    Status: Solved
On Sept 8 1978 approximately 4PM Mary Lou Arruda (15) was riding her bicycle in Raynham when she was abducted and later murdered. Her bicycle was later recovered at 430PM by the side of the road, next to it was a tire acceleration mark made by a vehicle. The tire mark indicated an uneven wear pattern to the tire, also recovered near the bicycle was a Benson & Hedges cigarette.
Several witnesses came forward reporting seeing a bright green vehicle with a black racing stripe in that area. Police were able to obtain a driver's description from the witnesses.  At 5PM the boy who discovered Arruda's bicycle returned it to her parents, who had just finished reporting Arruda missing to the Raynham Police Department. Police began an immediate extensive search that extended three (3) days in the area where the bicycle was discovered.

Timeline
Sept  9 Police had developed photos of the tire tracks found near the bicycle.
Sept 10 Police circulated a "wanted" poster containing the composite likeness of the driver of the green car based on witnesses description.
Sept 13 Police received information and a photo of James Kater
Sept 19 Kater along with his wife and attorney meet with investigators at the Raynham Police Department. Kater's appearance matched that of the likeness in the wanted poster, he also smoked Benson & Hedges cigarettes, and drove a bright green 1976 Opel with a black racing stripe. In examining the vehicle, the front tire had excessive wear.

James Kater
Kater was from Brockton MA and was on probation for an incident in 1968. Kater plead guilty to assault w/intent to rape, assault and battery w/dangerous weapon and kidnapping. These charges were from a 1968 kidnapping and attack on a 13 year old girl riding her bicycle and was later tied to a tree in Andover MA.

Mary Lou Found
On Nov 11, 1978 the remains of Mary Lou Arruda was discovered decomposing tied to a tree inside the Fall River-Freetown State Forest. Her remains
were discovered by dirt bike riders. An autopsy was preformed, the Medical Examiner determined the cause of death was strangulation by ligature or positional asphyxia. It was determined she was alive and in a standing position when tied to the tree. Once she became unconscious the weight of her head against the ligature caused her to suffocate. It was determined she died the day she was abducted. Arruda was buried in St. Joseph's Cemetery in Raynham.

Kater Trials
At trial, Kater testified on his own behalf and acknowledged his guilt from the 1968 incident. He claimed to have been rebuilding his life since his release from prison in Jan 1976. He denied any involvement in the Arruda case.
In 1979 Kater was convicted of 1st degree murder and sentenced to life in prison w/o parole, The Massachusetts Supreme Judicial Court overturned that verdict,
Kater would be convicted in 1978 and 1986, but both convictions were reversed on appeal based on witness testimony given under hypnosis. A 1992 trial ended in a mistrial before Kater’s final conviction in 1996 and sentenced to life in prison.  On Jan 23, 2016 James Kater died from cancer in prison at age 69.