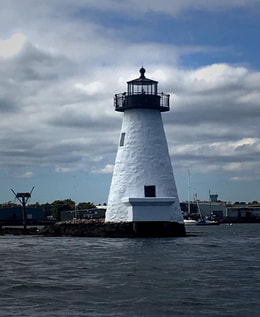 Palmer's Island & Lighthouse
Palmer's Island
Palmer's Island is 6-acre Island that sits in the New Bedford Harbor protected by the hurricane barrier.  The island is named after one of the first settlers of Dartmouth (now New Bedford), William Palmer. The island was used as an internment camp for Native Americans during the King Phillips War. Those captured were later sold into slavery in the West Indies.
In the 1860s, a hotel and dance hall were built on the southern side of Palmer's Island, and visitors came by steamer from New Bedford. The hotel became a favorite stop for returning whalers, and predictably illegal activity became rampant. The hotel closed about 1890 and an amusement park was built. This park failed after a few years, and the hotel burned down in 1905.

Palmer's Island Lighthouse
In 1843 a survey of lighthouses along the coast was conducted and it was determined there was a need for a lighthouse on Palmer’s Island. The land was purchased and a lighthouse was constructed, cost was $1,951 and was activated on Aug 30 1849, by William Sherman, the first keeper. The 24-foot tower was built of rubblestone, with wooden windows and floors. A walkway connected the lighthouse to the higher part of the island.
According to the annual reports of the Lighthouse Board, a new Fresnel lens was installed in the lighthouse in 1857, followed by a new lantern in 1863. The dwelling and tower underwent extensive renovation between 1867 and 1869. 1858,
George Cowie served as keeper at Palmer Island from 1872 to 1891. Cowie complained that the well water was brackish and that the smoke from New Bedford's factories blew across the island, contaminating the cistern with soot. It's unclear if anything was done to remedy the situation. From 1888 to 1891, a red light on the nearby Fairhaven Bridge served as a range light with Palmer Island Light. This arrangement helped mariners past Butler Flats before the lighthouse was established there.
The early part of the 20th century saw a number of changes at Palmer Island Light. A new fog bell and striking mechanism were installed in 1900 in a pyramidal wooden tower. Later the 1,260 pound fog bell was removed from this tower and placed in a structure that was attached to the lighthouse, with a door cut in the tower to provide access. In 1901 75 tons of rip-rap stones were placed on the beach to afford some protection in storms. In 1902 a covered walkway was built to the tower, and an oil house was added in 1905.
Arthur Small came to Palmer Island as keeper in 1922, moving with his wife Mabel from Boston Harbor's Narrows ("Bug") Light. Small, one of three lighthouse keeper brothers, was a gifted artist who often painted scenes on Palmer Island. He had been a seaman and lighthouse keeper since the age of 14.

1938 Hurricane Tragedy
On September 21, 1938, the worst hurricane in New England history battered the south-facing coast. During the storm, Arthur Small decided to light the lighthouse. Small was in the base of the lighthouse tower when a gigantic wave swept him out the door into the harbor. The following account is in Arthur Small's own words, cobbled from various interviews.
"I was in the water, halfway between the island and Fort Phoenix. I'm a strong swimmer, and I began to work my way back toward Palmer's Island, using an overhand reach. But before I could get there I found myself surrounded by so much flotsam, broken boats, and house material that I could not reach land except by diving beneath the wreckage. I dove down, but I was badly injured by the floating debris before I reached shore.
I was hurt and she knew it. Seeing the wave hit the boathouse was about the last thing I remember. I must have been hit by a big piece of timber and knocked unconscious. I never saw my wife again, but I think she saw me washed overboard, and she ran to the boathouse and tried to unlash our boat which I had securely fastened. She was an expert boatswoman, but in her attempt to save my life she lost her own.
I finally made the island and crawled up the stairs to the light, for I was so badly hurt I could not walk. My only thought was that the light must be kept burning. I was able to turn it on and to start the foghorn. I hoped I would attract attention, for there was no fog that night. Men in the Pierce and Kilburn Boat Yards at Fairhaven heard the fog horn and rowed over to see what was the matter. They found me lying in the tower, and even though the oilhouse was the only building remaining on the island, except the lighthouse, they found no trace of Mabel. They rowed me back to their boat yard, and I was taken from there to St. Luke's Hospital in an ambulance."
The damage to the island and the lighthouse was severe, all of the structures on the island, except the lighthouse, were washed away. Many of Arthur Small's paintings were lost in the hurricane, along with his large library of several hundred books. His wife had their savings of about $7,500 in her possession when she drowned; this was also lost. Arthur Small was granted a two-year absence with pay, after which he became the keeper at Hospital Point Light in Beverly MA.
Arthur Small died on Mar 7 1958 and was honored by the US Coast Guard with burial in Arlington National Cemetery.
Upon the departure of Arthur Small, Franklin Ponte, formerly an assistant at Boston Light, went to Palmer's Island Light as a temporary keeper. Ponte's nephew, Joseph Ponte, served as an assistant. All that was left was the lighthouse tower and the oil house, and Joseph Ponte said that he and his uncle lived for a almost a month in the lighthouse before the Coast Guard sent a garage that was converted into living quarters. The light was automated in 1941; Martin Maloney was the last keeper of Palmer Island Light.  In 1963, with the construction of the hurricane barrier, the lighthouse was deemed useless.

Ownership Changes, Vandalism, Restoration.
Palmer's Island became more easily accessible to lighthouse seekers and vandals alike. The island passed through various owners, including radio station WBSM. In 1966, the tower was burned by arsonists, gutting the interior and practically destroying the lantern room.
In 1978, ownership of Palmer's Island went from Norlantic Diesel to the City of New Bedford, and local resident Dr. John O'Toole mounted a preservation effort.
20 tons of trash and debris from the island was removed form the island, which they converted into $300 for the lighthouse fund. A new fiberglass lantern was constructed to replace the badly burned one, and a 500-pound steel door was installed. The New Bedford Fire Department contributed a new iron spiral staircase.
In 1989 after another restoration, the lighthouse fell victim to more vandalism.
On July 20 1999 the badly damaged lantern room was removed and taken to the city's wastewater division. Welder Jose Pereira rebuilt the lantern, while preserving the original metal frame. The four-foot-high, seven-foot-diameter lantern was reinstalled on August 25. The tower was repainted by a crew provided by the Bristol County Sheriff Department's Pre-Release Program. A new solar-powered beacon was installed, with a 250mm clear acrylic lens. The light now has a signature of two seconds on, six seconds off, and is visible for eight nautical miles. The new lighting apparatus was paid for with donated funds.
The lighthouse again fell into disrepair in the ensuing years, but another renovation was carried out in 2014. The work included the removal and restoration of the lantern, the cleaning of debris from inside the lighthouse, the repointing of the interior and exterior walls, repair of the stairs, the installation of new windows, and the installation of new solar powered lighting apparatus.​
​
​Lighthouse Keepers:
William Sherman (1849-1853)
Charles D. Tuell (1853-1861)
(son Joseph Tuell (1858-1935) was born on Palmer's Island, when he died in 1935 his ashes were spread over the island by airplane)
George Cowie (1872-1891)
Arthur Small (1922-1938)
Franklin Ponte (1939-1940)
Martin Maloney (1941)

Massachusetts Real Estate Disclosure
Massachusetts General Laws Chapter 93 Section 114 : Real Estate disclosure for haunted homes, murder and suicide
The fact or suspicion that real property may be or is psychologically impacted shall not be deemed to be a material fact required to be disclosed in a real estate transaction. “Psychologically impacted” shall mean an impact being the result of facts or suspicions including, but not limited to,  the following:
(a) that  an occupant of real property is now or has been suspected to be infected with the Human Immunodeficiency Virus (HIV) or with Acquired Immune Deficiency Syndrome (AIDS) or any other disease which reasonable medical evidence suggests to be highly unlikely to be transmitted through the occupying of a dwelling;
(b) that the real property was the site of a felony, suicide or homicide; and
(c) that the real property has been the site of an alleged para-psychological or supernatural phenomenon.

No cause of action shall arise or be maintained against a seller or lessor of real property or a real estate broker or salesman, by statute or at common law,  for failure to disclose to a buyer or tenant that  the real property is or was psychologically impacted.  Notwithstanding the foregoing, the provisions of this section shall not authorize a seller, lessor or real estate broker or salesman to make a misrepresentation of fact or false statement
New Bedford Police Memorial
On June 2 1957 a memorial dedicated to the memory of all departed members of the New Bedford Police Department was unveiled. The memorial once sat on the lawn of the Spring Street Headquarters (demolished).  It was moved and now sits in front of New Bedford Police headquarters on Rockdale Avenue.

James G. England
On September 14 1955 James G. England (40) was on uniform patrol  when he was shot in the stomach with his own service weapon while struggling with Joseph O'Donnell, a mentally disturbed individual, inside a doctor's office downtown.  Members of the public assisted the injured officer until he was transported to the hospital. Officer England lived long enough to identify his attacker and explain that O'Donnell shot himself after shooting him, but in a manner that he would be able to survive. Officer England was taken to St. Luke's Hospital but died from his gunshot wound. James G England joined the NBPD in 1947, served the police department 8 years. He is buried in St Mary's Cemetery.