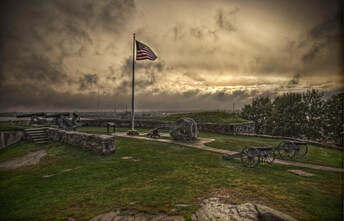 National Register of Historic Places 1973
Revolutionary War - Fairhaven
History: The American Revolutionary War (1775-1783) also known as the American War of Independence was fought primarily between the Kingdom of Great Britain and the thirteen (13) original colonies. The war resulted in the overthrow of British rule in the colonies and the establishment of the United States of America.

Fort Phoenix
On May 13-14 1775 the first naval battle of the American Revolutionary War took place off the shore of Fairhaven/New Bedford when local militia captured two British sloops in Buzzards Bay. The village of Fairhaven quickly petitioned the government for the construction of a fort at Nolscott Point to protect the harbor. The fort was constructed in 1775-1777 and was armed with eleven (11) cannons, several of which had been captured in the Bahamas by John Paul Jones.

British Attacked  !!
On September 5 1778 a fleet of British ships split off with one detachment going eastward and landed on Sconticut Neck out of range of the guns at Fort Phoenix.
Timothy Ingraham (died 1816) was the co-commander of a force of 32 men who attempted to defend the fort that earlier stood on the site of Fairhaven's Fort Phoenix when the British attacked and destroyed it.
​A militia force lead a courageous battle to protect the fort and the town, Unfortunately the British attacked with 4,000 troops. The troops marched along the west shore of the Acushnet River to Acushnet, then came south through Fairhaven to Sconticut Neck. At this time the British drove a group of 34 militiamen from the fort, burned the barracks, broke up the gun platforms and smashed all but one of the cannons.
In 1778 the fort was rebuilt and in 1784 was renamed Fort Phoenix after the mythical bird which rose from its own ashes. The fort was modified again in 1798 and again in 1808.
Prior to the War of 1812, Fort Phoenix was enlarged under the supervision of Sylvanus Thayer, who later became the “Father of the Military Academy” at West Point. In June of 1814, the fort helped repel an early morning attack by British in landing boats from the HMS Nimrod.
Fort Phoenix was manned throughout the Civil War by troops who rotated duty between the Fairhaven fort and the newer Fort Taber in New Bedford.
Eight (8) 24-pound cannons were installed at the beginning of the war, five of which remain at the fort today. Fort Phoenix went out of service in 1876.
In 1926, it was purchased for the town by Mrs. Urban H. Broughton, a daughter of the town’s benefactor Henry Huttleston Rogers. Since then it had been a public park owned and maintained by the Town of Fairhaven.
Fort Phoenix Cannons
1812 Field Artillery
Two of the newest additions to Fort Phoenix is two (2) cannons mounted on field carriages. The barrels of these cannons might have been at Fort Phoenix during the War of 1812, but not confirmed. The 4-pound barrels are on permanent loan to the Town of Fairhaven from the New Bedford Whaling Museum. The carriages were built by Fairhaven Historical Commission member Charles Cromwell. They were mounted and put on display at the fort in June 2009.

John Paul Jones Cannon
The John Paul Jones Cannon was installed at Fort Phoenix in 1777. The barrel of the cannon is said to have been cast in England in 1690.   It bears the "King's Arrow" and the royal seal indicating its of British Heritage. The cannon was one (1) of many cannons taken from the British in the Bahamas by the crew of the Alfred.  John Paul Jones was an officer on board that ship when the cannons were captured.  The cannons were stored by the Americans in Connecticut and were used to outfit the forts throughout the colonies.
The John Paul Jones cannon was one (1)  of the eleven (11) iron guns at the fort during the Revolutionary War. The cannon was remounted and set up in the village at Meeting House Hill, near Main and Center streets during the War of 1812.  Later it was moved to the unofficial "town green" near Union and Middle streets.
In May 1882 the cannon was moved again, it was firmly planted muzzle-down into the sidewalk on the corner of Main and Center streets. In 1885 a bronze plague was added by the Fairhaven Improvement Association.  Center Street was widened in 1950 and cannon was moved again to the Town Hall lawn, then finally moved back to Fort Phoenix and was mounted on a naval carriage.

24-Pound Seacoast Cannons
There were five (5) large cannons installed before the Civil War. Their trunnions are marked, “W.F.” on one side and “1828” on the opposite side, indicating they were cast at the West Point Foundry in Cold Spring, New York, in the year 1828. Eight (8) large cannons were installed during the Civil War, but at the end of the war three (3) were transferred elsewhere.   After the fort was decommissioned in 1876, the carriages for these guns fell into disrepair and were chopped up for firewood. The barrels lay on the ground for some time until an out-of-town buyer asked to purchase them for display. At that time, Warren Delano II, the grandfather of Franklin Delano Roosevelt, offered to buy the guns to keep them in Fairhaven if the Improvement Association would raise funds to build new carriages for them. This was done so these guns would never leave Fairhaven.  The carriages have been rebuilt several times since then. These cannons have been fired yearly since 1996 on the morning of July 4th. They are also fired at dusk during historical encampments staged each May and September by the Fairhaven Village Militia.
​                                                                   Revolutionary War - New Bedford                                                                                          ​Bedford Village
The detachment that brought  in 4,000 soldiers to Clark's Cove were piloted under the guidance of a traitor, a Dartmouth Tory (Pro-British), Joe Castle.
Castle had worked for Joseph Russell and went to the British and acted as their guide. After spending most of the day disembarking, the soldiers marched down Brock Avenue and across the head of the cove then through a forest path to County Street up to Union Street. At this point, the troops divided, and one part marched down to the river to Bedford Village and proceeded to torch and plunder the abandoned village destroying warehouses and homes and equipment. Almost everything went up in flames ; 11 houses 20 shops, 7 ships, 7 schooners, and 10 sloops.
​
Bloodshed on County Street
John Gilbert, hired by Joseph Russell to move his household goods and his wife to a place of safety. Gilbert arrived and discovered a note, Mrs. Russell had departed, but he should take Mrs. Peace Akins instead. He had the horse ready for Mrs. Akins when she decided that she forgotten something in the house.
She took too much time and the British came marching down the street.  A soldier seized the bridle and ordered Gilbert to get off. The soldier pulled the reins suddenly and the horse knocked the soldier down, and Gilbert escaped leaving Mrs. Akins behind. The British soldiers never harmed Mrs. Atkins.
Gilbert made his escape up Smith Mills Road (Rt 6). While on his way he told William Hayden and Oliver Potter where the British troops were, and they hid in the wooded area along County Street near North Street. With muskets, they killed two of the soldiers. This was the first blood shed.
Revenge was swift. Abraham Russell, Thomas Cook (40) and Diah Tafford (21) were armed and trying to leave the village walking by up North Street. They were spotted by the British who fired on them and attacked them with bayonets and sabers.
Russell died on September 6 1778 about 10 AM in Joseph Russell's house, where he had been carried after lying in the road all night. Cook was shot in the leg and bowels, and that shot went through his bladder. He lingered in the road all night and also died in the morning of September 6 1778. Tafford was shot in the heart and died instantly.  Abraham Russell and Thomas Cook were later laid to rest in Dartmouth, on Jedediah Sherman’s farm on the road to Russells Mills (possibly what is today Padanaram Cemetery).  Abraham''s sister Susannah  had married Sherman in 1770, and wanted her older brother close by, where she could tend her beloved hero’s grave. Tafford was buried in the "Burying Ground Hill" (a potter's field). Other sailors were also buried in this lot, which was owned by Joseph Russell.
Joseph Russell's house was located at the top of William and County Streets in 1750. The house was removed in 1823 for construction of Charles W Morgan's house. In 1901 Morgan's house was demolished to make way for the New Bedford High School which was completed in 1902. Today, the former New Bedford High School is now the New Bedford School Department Administration Building.
On May 24 1927 a memorial was dedicated to honor the three men who lost their lives defending New Bedford from the attacking British.
Head of the River Bridge - Acushnet
Head of  the River Bridge
The only bridge to cross the Acushnet River for several hundred years was the bridge at Acushnet Village. The bridge was torn up by British forces during the attack on Acushnet during the Revolutionary War.  After being repaired after 1778, it was damaged again during a September gale of 1815 it was reconstructed with wood.  In 1828, the town of Fairhaven (since Acushnet wasn’t incorporated yet) approve money to build a stone bridge to replace the wooden bridge. Construction began in 1828, but the monies were insufficient to complete the job.  Additional funds were approved in 1829 and the work was finished that year. The date “1829” is carved on the south wall of the bridge and “1828” on the north wall.  In 1959 the bridge was widened with steal beams.

Lieutenant James Metcalf Killed
The engagement at the bridge was On September 5, 1778, Lieutenant James Metcalf and Lieutenant William Gordon were defending Acushnet with a one-gun detachment of a Massachusetts State Artillery Company against a force of the 4,000 British soldiers.
Lt. Metcalf was mortally wounded and was carried by his men to the headquarters of the company, North Water near Union street, New Bedford. Metcalf died the third day after he was wounded. His comrades mournfully carried his lifeless body over the county road, over the village bridge; up to the Meeting House and then in the Precinct cemetery, amid strangers, with no loved ones near, they buried him with military honors. There is no tombstone. The exact location of his grave is unknown.

Lieutenant William Gordon   ​
While researching the story about Lt. Metcalf, another interesting story was discovered about Lt. William Gordon.  Gordon before he arrived at the bridge in Acushnet, was on watch duty in Bedford Village, and was attracted into the house of Caleb Russell. The delightful smell coming from the home was very powerful one to the hungry soldier.
He saw within, steaming hot Indian pudding served on pewter platters. Gordon had evidently miscalculated the location of the British, for as he was in the act of helping himself to the delicious contents of a platter an alarm sounded. He sprang to his feet, rushed out of doors, and was soon a prisoner of war, the first capture made by the enemy in that eventful raid. Gordon closely watched his captors, and in an opportune moment leaped a wall, fled into the woods and was soon with his battery in Acushnet.  Lt. William Gordon afterwards became a prominent citizen of Acushnet.