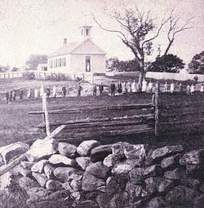 In the Jan 27 1886 edition of the Boston Globe was the following tale
In January of 1886, the Muttock School temporarily closed its doors due to panic over a ghost. The ghost--believed to be that of a young boy who died from traumatic injuries after a "severe flogging"-- had a reputation for helping children who were in danger of being punished by the teacher, even assisting the children in solving math problem by writing out the arithmetic in phantom writing mysteriously appearing on the chalkboard. But when Miss Nancy Butler--a young woman who lived a short distance from the school--claimed that the ghost chased her home from work one night, joining her as she passed by the small school house, the children's fear grew into an all out panic.


​         In investigating this story there is no record about the "schoolhouse ghost", additionally no record of a school closing around 1886. The Green School closed for two weeks in 1885 due to a scarlet fever outbreak. As for the victim, Nancy Butler who claimed to have been chased by the ghosts after she walked past the schoolhouse on her way home from work at the "straw shop", Town records do have a Nancy Butler living on Cambridge Street and most likely worked at the "Bay State Straw Works" on Courtland Street. Her route home wouldn't have had her walking by the Muttock School. In 1902 a story appeared in the Brockton Times claiming a ghost, dressed in a white robe,  was "haunting" the Muttock neighborhood. Stories have circulated the last few days that there was a ghost in that neighborhood, but little credence was given to them.
On a Saturday evening resident Ralph Caswell was chased a considerable distance. On Oct 12 1902 a crowd out searching saw this figure, robed in white, with a flowing veil on its head. It was in the orchard at the Crossen place. When it saw the group coming it threw apples at them and they gave chase. It led them the quickest they ever traveled, up and down hill and over a high fence into the woods. It escaped. It is generally believed that it was a man dressed up to have some fun. 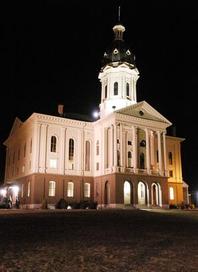 Middleborough Town Hall
Mystery: Who haunts Town Hall ?  Sounds of footsteps in the Grand Hall and some claim to have seen an apparition.

Construction of the Middleborough Town Hall began in 1871, on donated land. Solomon K Eaton was the architect for the building. He died on Oct 9 1872 during the construction, never seeing the completion of the building in 1873. After the death of Eaton, Horatio Barrows, who was serving as head of the town-appointed building committee, oversaw the completion.
The building once served as a district court house, community center, post office and jail. The Grand Hall (Ballroom) is on the second level and was rented for a variety of activities, from birthday parties to weddings to theater presentations. Since the renovations its hardly used.
Since the construction of Town Hall, the building has settled which has caused a pitch of the cupola. In 1885 repairs were made to straighten the cupola, only to have it continue to pitch. The pitch has been relatively minimal; it nonetheless remains noticeable to this day.

Peter Oliver Estate 1769
Mystery: There are several reports of paranormal activity. These reports include two female full body apparitions dressed in white, shadow figures and even a ghost dog.

The Peter Oliver House, often referred to as the "Small Oliver House" was constructed in 1769 by Judge Peter Oliver for his son, Dr. Peter Oliver Jr. and his wife Sally Hutchinson as a wedding gift in Feb 1770. In the attic of this home were built rooms for the slaves of the family
During a restoration in the 1940's the front door sill was replaced and a penny dated 1769 was discovered. Additionally, the date 1769 was scratched on the foundation of the chimney and handwritten on the wall of the "best bedroom" closet.
Dr. Peter Oliver Jr. (1741-1822), a physician, established his practice in June 1764 in a shop constructed by his father. In 1765 He became engaged to Sally Hutchinson, daughter of the Lieutenant Governor of Massachusetts Colony Thomas Hutchinson.  The Oliver's had three (3) children who were all born in the house. Margaret Hutchinson Oliver 1771, Thomas Hutchinson Oliver 1772 and Peter Oliver III 1774.  In summer of 1773 Benjamin Franklin was a guest in the house for three days, being the guest of honor at an evening reception attended by many prominent Middleborough residents.

Independence Discord
Rising pressure for independence from Britain increased public discord towards the Oliver and Hutchinson families, and other Loyalists.
Judge Peter Oliver, then serving as Massachusetts Chief Justice, was impeached February 24, 1774, by the General Court, and a campaign to vilify him was undertaken. Peter Oliver, Jr., himself, was forced to sign an agreement not to accept any commission from military governor General Gage. In Feb 1775 a group of citizens forced Peter Oliver, Jr., to flee to Boston where his remaining family was staying.  He left America in April 1776 and was never to return, he died in 1822.

Property Confiscated and Future Owners
The Oliver House and property was confiscated by the Commonwealth and the contents of the house inventoried, recorded then auctioned. During the Commonwealth's ownership Governor James Bowdoin frequently resided there during his administration.
The house was auctioned and was subsequently purchased by many throughout the following years. Martin Brimmer of Roxbury, Nathaniel Russell (1793-94), Hushai Thomas, Jr. (1794-97), and General Abiel Washburn (1797-98).   The house was acquired by Judge Thomas Weston of Carver (1770-1834), and it remained in the possession of his and his daughter, Bethaniah (Weston) Sproat until 1893.
The Sproat's marriage was struck with tragedy: Her husband, Earle Sproat, suffered tuberculosis, and two children died in infancy.  A third child, Abby Sproat, died at age one (1) due to burns from hot water. The couple's surviving children were Mary Sproat,  Thomas C. Sproat, Henry H. Sproat.
When Earle Sproat died, the property passed to Henry H. Sproat, and upon Henry’s early death, to his minor daughter, Eleanor Bethania Sproat. The house was sold by Eleanor’s mother and guardian Katherine Ann Sproat in October, 1893, to Henry Champion Jones of Boston (1856-1942).
After the death of Henry Jones, his family offered to donate the property to the Middleborough Historical Association which declined the offer. In a twist of events the property was sold in 1945 to Peter Oliver, a relation of the original owner who restored the house as closely as possible to its original appearance. It has remained in the Oliver family since that time. In 2015 the property was purchased for $338,000 by the Town of Middleborough. The town has place a historical restriction on the property, created the Oliver Estate Advisory Committee and has created an annual budget of $100,000 for care and upkeep.

Muttock Mill
In 1734 a petition to the court requested to build a mill on the Nemasket River. There was opposition from those who felt enlarging the dam might effect the catching of herring. The petition was finally granted and after provisions were made for the herring the dam was built.
In 1744 Peter Oliver moved to the Muttock Area and would become a prominent citizen in the colony. He purchased most of the land around the Muttock including the dam and the water privileges. He erected a forge and mill on the dam. The iron foundry, called Oliver's furnace was located just below the dam.
The business made the Muttock the largest and most enterprising village of the town. Besides employing many full-time men at the slitting mill, over 50 men, when not working on their farms, aided in the making of establishments at this location such as the blacksmiths shop, shovel shop, finishing shop, and nearby was a store. The works on the river were managed for short periods of time by many different men, but Abiel Washburn carried on a successful business there until his death in 1843. Eventually the complex fell into ruins.

Oliver Hall
The home of Judge Oliver  was located between two hills at the Muttock. The grounds and park included all the land from Nemasket Street to the river. Oliver Hall burned down in 1778.

Hell's Blazes Tavern
Mystery: Numerous reports by the owner and wait staff claimed that doors seemed to slam for no reason and footsteps could be heard. In the 1960s The Standard-Times ran stories about ghostly goings-on at Hell’s Blazes -- doors that seemed to slam for no reason footsteps rapping sounds and a feeling by then-owner William Ekasala and his employees that an unseen presence was in the room with them ?

Constructed in 1690 from land originally purchased from local Native Americans in 1673, the famous
The original one-floor structure was long the home of the Holmes family; a subsequent two-floor addition was added in 1763. It was in this addition that the famous tap room was located. The tavern had a long and storied history of tending to the needs of locals and passersby alike; among its many visitors was Daniel Webster. The building remained in the Holmes family until 1926, when it changed hands to a new owner, who maintained business there. In 1968 in order to conform the Middleborough's anti-profanity law, the owner volunteered to change the taverns name. It was renamed "The 17th Century House".
On May 31 1971 the tavern caught fire, and was fully engulfed when firefighters arrived. The carriage house was unscathed by the fire. In 1972 "Hell's Blazes" reopened as a semi-private club for members and their guests, it later reopened to the public. On Jan 1 2004 the tavern closed for good and was finally demolished in 2019.  It's claimed that Hell's Blazes got its name from the glow once cast upon the building by a nearby smelting furnace. Smelting furnaces supplied metal implements to homeowners and cranberry growers and were common in the Middleborough area in the 1700's.    .