Hand Rock & Thompson Long Gun
Legend: The Legend of Hand Rock
Hand Rock
The granite rock which sits on top of Indian Hill off East Main Street in Middleborough. Incised into the surface of the rock is the imprint of a hand, its fingers splayed wide. The impression of the hand on the is a local legend created when a Native American was shot and killed, his hand striking the rock and mystically leaving the depression.
A handwritten record in the possession in 1952 of Alice H. Cornish, a descendant of John Tomson, recounts the legend.  At the outbreak of King Philip's War in the summer of 1675, most Middleborough residents had sought refuge in the relative safety of the garrison. The growing hostility of the Natives towards the garrison and their increasing boldness eventually became intolerable for the English sheltered inside.
"The Indians would daily appear on the south side of the Nemasket river, opposite the fort, and taunt those in the garrison with insulting gestures. Lt. [John] Thompson ordered Isaac Howland, a distinguished marksman, to take the long gun and shoot one of the Indians. This he did while the savage was on the rock insulting them. The distance from the garrison to the rock was 155 rods, nearly half a mile."  The Native American was wounded and taken to the house owned by William Nelson where later died. He was buried in a nearby field. The Native Americans sought revenge and burned the house and a local mill.
​Though neither this record, nor the numerous other historical accounts of the event make specific mention of the hand print in connection with the shooting, local folklore has always connected the two, the handprint being the consequence of the shooting.
In a recent more scientific study of the Hand Rock, Edward J. Lenik author of Picture Rocks: American Indian Rock Art in the Northeast Woodlands describes the rock in question:
"The handprint-and-wrist symbol has been pecked into the surface of the rock. The design is naturalistic and represents a right hand. It measures 26 centimeters (10 inches) in length from the tip of the middle finger to the bottom edge of the wrist. The fingers are extended and splayed and point to the north. The maximum width of the handprint is 21 centimeters (8 inches) when measured between the thumb and small finger. The depth of the pecked design ranges from 4 to 6 millimeters (0.2-0.25 inches).

Thompson Long Gun
For many years after the shooting incident, many re-enactments where done. During the towns centenary celebration in 1869 the "Thompson Long Gun" was displayed. The Long Gun is described as seven (7) feet four (4) inches long and a six and a half (6 1/2) barrel length.
The gun weighs twelve (12) pounds. The gun remained in the Thompson Family for many generations and is now housed at the Old Colony Historical Society in Taunton. 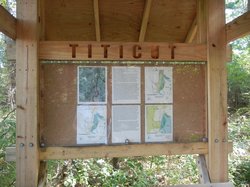 Camp Titicut
Titicut is in the northwestern portion of Middleboro at a 90-degree bend in the Taunton River. This area was the old Indian reservation and was officially deeded to the Indians on June 9, 1664, by Josias Wampatuck, the son of Chickataubut. This deed covered a three-mile long parcel of land along the Taunton River called Cotunicut.
The camp opened in the 1950’s as a place for local youth to learn about nature, animals, swimming, boating and other outdoor activities. The camp no longer exists, it’s now known as the 33-acre Titicut Conservation Area.
The history of Camp Titicut goes back to the Native Americans, who used the area for a campsite and burial ground. The word “Titicut” comes from the Wampanoag word for “the place of great river”. From 1946 to 1951 the site was excavated by a chapter of the Massachusetts Archaeological Society. More than 6000 artifacts were uncovered including graves. In 1947 the first grave was located and by the end of 1947 twenty-six (26) were located and documented. Fifteen (15) of these skeletons were sufficiently preserved to be removed for further study. This study was undertaken on our behalf by the Department of Physical Anthropology at Peabody Museum.  Interestingly (5) burials showed the results of raiding parties. Quartz arrows were embedded in the skeletons found and were inflicted on the young and defenseless. These raids probably occurred when the men of the village were off hunting or fishing. Only young children, old men and middle aged women were tending the camp at the time of conflict.
During the early 1990’s all skeletal remains were returned to the Mashpee (Wampanoag) Indians for reburial in their cemeteries. Today new rules apply regarding discovery of skeletal remains found while excavating in Massachusetts or by natural erosion.
The only remnants of Camp Titicut that remain are the flag pole, a stone pedestal that once held a sun dial and a partial structure that was once the camp grounds cafeteria.

Legend: During King Philip’s War, the forest areas of Rochester and Mattapoisett were used as a hiding point for both sides. It’s alleged that near where the cemetery now stands, there was an ambush and the captured prisoners were subsequently hanged from the trees on Wolf Island Road. It’s not known whom or wha

Stories of the haunting of the Titicut Conservation Area continue to circulate.  Local legend speaks of a boy who drowned in the lake while attending Camp Titicut in the 1940’s. It’s said the ghostly apparition has been seen wandering the camp grounds. This is factually wrong, since Camp Titicut didn’t open until the 1950’s.
Camp Titicut is believed to be haunted by King Philip, whose body reportedly was drawn and quartered here. The sound of leaves rustling, according to local tales, is his body parts trying to get back together. This too is factually wrong, since King Philip was captured and murdered in Mount Hope Rhode Island (now Bristol RI), 60 miles away.
Lastly, another story states that it was not King Philip, but rather Philip’s brother (Wamsutta) and his wife haunt Camp Titicut, having been murdered there. However, Wamsutta became suddenly ill after being summoned to the Plymouth Courts some 20 miles away over a land dispute.