Lincoln Park 1894-1987
Mystery: Ghosts ? As Lincoln Park began to rot over time, stories of hauntings emerged. "The spirit of the park employee who fell from the Comet was often seen walking the tracks, making his usual daily inspection round. Each time he got to the top of the steepest hill, he’d disappear--perhaps a residual haunt replaying to the point of the worker’s fatal fall.
Oher reports claimed the faint sounds of carousel music and the smell of Lincoln Park’s clam cakes. Now that Lincoln Park has been demolished and the land has been repurposed as new homes, one has to wonder: are the spirits at rest, or are they just biding their time and waiting for their chance to haunt the new residents?

History:  The Beginning 1894-1940
Before being named "Lincoln Park" it used to be known as "Midway Park" or "Westport Park". The name "Lincoln Park" was chosen by a lottery.
The Union Street Railway Company created Lincoln Park on July 4 1894 as a way to connect Fall River to New Bedford. Forty-six (46) acres of land in Dartmouth was purchased and began being used as a picnic area. In 1901 A fire severely damaged the park, destroying the theater and several other buildings.
In 1910 A Looff Carousel was added to the park and in 1912 a "Giant Coaster" was leased from the Fall River Coaster Company and installed. In 1921 a PTC-54 Carousel was purchased from the Philadelphia Toboggan Co. and installed. The old Looff Carousel was removed.

Change in Ownership, New Rides, New Roller Coaster 1941-1960
In 1941 Lincoln Park was purchased by Boston investors John Collins, Harry Prince and Max Zand for $40,000. They invested $150,000 installing a fourteen (14) lane bowling alley and updating an existing dance hall, and added a full complement of amusement park rides.
In 1943 the Giant Coaster was closed for renovations, which was slowed due to World War II. In 1946 the park hired National Amusement Devices (NAD) to erect a much bigger roller coaster. NAD commissioned Vernon Keenan and Edward Leis to design and install the coaster which was to be named "Cyclone".  The coast had two (2) trains each with five (5) cars and had a top speed of 55 MPH. Keenan has also designed the Coney Island Cyclone in 1927. Keenan turned to its top builder, Ed Leis of East Providence, R I to install the new Cyclone. Total cost to erect the coaster was about $80,000. The "Cyclone" was changed to "Comet" in 1947. The ownership of Lincoln Park agreed to drop "Cyclone" and simply call it Comet. There are documents indicating the owners of the Coney Island Cyclone had objected to their coaster being cloned, but to avoid legal entanglement, the ownership changed the name.

Roller Coast Accidents
The first of many accidents started in 1964. The first caused the death of a man who fell off the roller coaster after standing up as it ascended the first lift.
On July 23 1968 just after 10pm, the rear car of one of the trains became disconnected while ascending final hill. The cart then rolled backwards causing the cart to derailed sideways, dumping nine (9) people ten (10) feet to the ground below. The Dartmouth Police launched an investigation and a theory developed that the recent spell of dry weather and damp nights may have caused expansion or contraction along the roller coaster rails — or riders may have been rocking the cars, causing the last one to derail.

Fire !
In September of 1978, an arson fire destroyed two buildings in the park. It took 60 firefighters from Dartmouth and Westport to bring the blaze under control.
The park’s bowling alley saved from the flames
​Murder at the Park
During the very early morning hours of March 6 1982 Charles Chaples (21) gained entry into a home in Dartmouth and stole a 12-gauge shotgun, two (2) boxes of shells and a pair of gloves. After committing the house break, he drove to the area behind Lincoln Park and parked his vehicle. He walked through a wooded area and positioned himself behind one of the amusement rides. Form this position Chaples was able to carefully watch the activities of the night watchman, Raymond Santos (48). At a maintenance warehouse area of the park, Chaples confronted Santos and demanded the keys to the park, Santos refused, Chaples persisted and again Santos refused a second time, then Chaples raised the shotgun and fired at Santos, in all he Chaples shot Santos three (3) times. Chaples then fled the scene. Chaples tossed the shotgun into the woods along with the shells.
On March 6, 1982 at 7:30AM Maintenance workers discovered the body of Raymond Santos. Chaples was questioned the next day about his activities and whereabouts. During questioning he confessed to the murder.
In 1983 Charles Chaples was convicted of 2nd degree murder and sentenced to lie in prison. He also received a concurrent sentence of 3-5 years for larceny, and breaking and entering with intent to commit a felony. He was paroled in 2007 after serving 24 years.
In 2007, Chaples was arrested by Mattapoisett Police Department, after a 24-hour search for him, after a domestic dispute. He had violated his parole and was charged with aggravated assault & battery, intimidation of a witness and larceny all connected to the domestic incident.
In 2014, Chaples applied for parole again, on March 17 2015 his request was denied, but will reviewed in 2020. 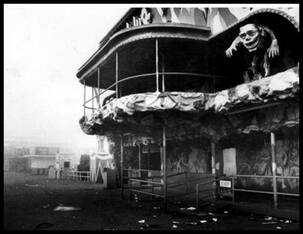 ​Fire !  & Ride Accident
In May 1982, another arson fire in the “Monster Ride”. Police believed a rider stepped out of a slow-moving car inside the darkened building and set fire to wall coverings among the various monster displays. It’s believed the rider then stepped back into the car and exited the ride before the fire was noticed.
In June 1983, six (6) people were injured on the “Himalaya Ride” when one of the large painted backdrops fell on the riders. All of those injured were teenagers

Change in Ownership
In June 1986, Lincoln Park was purchased by Jay Hoffman for $5 Million. He planned to invest $2.5 Million on renovations. The bowling alley was removed and converted into a full arcade. In June of 1986, Lincoln Park announced the park’s opening would be delayed. There had been delays in the delivery and installation of new rides.

​Ride Accidents and Deaths Continue, Park Closes
On August 17 1986, 27 year-old Westport resident Michael Lynch (electrician) was killed, after falling 55-feet, while preforming maintenance work on the roller coaster.
On November 3 1986 plans were developed to move the carousel to Battleship Cove, Fall River. It is one of several things sold off to try to raise revenue to operate the park.
A Providence Journal article, in May 1987, the new owner spent $75,000 restoring park, and had a 5 year plan to restore park to its former glory. The kiddy roller coaster (Comet  Jr.) was dismantled during his upgrade. On September 29 1987 four people were injured when the braking system on the roller coaster failed. Just as the carts were entering the area, the braking system jammed and the cars jackknifed. This was the final ride for the roller coaster. The cars remained frozen in time on the tracks until vandals tore them off years later. On December 3 1987 Lincoln Park closed, the park owed $48,000 in back taxes and $13,000 to the town for police details. Almost all of the 48 rides in the park were dismantled and auctioned off.
Foreclosure &  ​Fire !
On April 9 1988 The park property was foreclosed on by the bank after it failed to sell for $3,500,000. Jay Hoffman said at that time that he was confident it would never reopen as an amusement park. The bank proceeds to auction off anything of value on the property.
During the 1990's numerous arson fires occurred, the first fire burning 10 buildings. In 1991 another fire at the park The Ballroom, and Pavilion buildings destroyed. The fire was cause by two teenagers playing with fire in a building called the taproom. At this time the property was owned by Shawmut Bank.
On February 2 1992 Leonard Hebert, an independent real estate broker, buys the property for $1 million with plans to restore and reopen it.
On July 13 1992 A fire consumes the skating rink and former bowling alley.  Development plans are scrapped because there isn't really nothing left to rebuild. Its not clear if Hebert sold the property back to Shawmut Bank or simply defaulted and let it revert to them. In 1993 another arson fire consumed the food buildings.
In 1993 Bronhard Trust buys the park from Shawmut Bank for $265,000 the least ever paid for the park.
In 1997 another arson fire, the warehouse and maintenance building. In 1998 "The Lincoln Park" sign was removed to add a water pumping station at the front corner of the property.

Redevelopment
The trains were purchased by Little Amerricka Amusement Park, who also expressed interest in buying the coaster in 2002. The owner of Lincoln Park at the time, Walter Bronhard, offered to sell the coaster for $90,000, but received no buyers. Little Amerricka decided that they would possibly build an exact replica of the ride and all of the proposals were cancelled.
On September 28 2002 the park is sold to Midway Realty, LLC for $1,85 million. In 2003 fire consumes an empty house on the property, the former house of the park keeper. In 2005 The Lift Hill of the comet roller coaster collapses effectively crushed by heavy snow in a winter storm. On July 12 2012 the roller coaster was demolished. The "Village at Lincoln Park" is under construction on the 42-acre site.