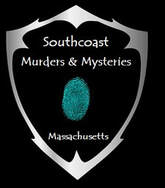 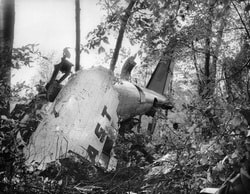 New Bedford's Deadliest Airplane Crash
On Sept 15, 1957 at 846 PM Northeast Airlines Flight #285 departed Martha's Vineyard for New Bedford with 25 passengers. The plane was on a flight from Boston to Hyannis, Nantucket, Martha's Vineyard, New Bedford then New York. The Douglas DC-3 struck two (2) 45-50 feet high trees, some 4000 feet short of the runway. The right wing separated on impact, causing the aircraft to roll right, cutting a path through the dense growth of trees. The aircraft cartwheeled until the left engine struck a large tree trunk, causing the fuselage to break in two.
The crash killed 10 of the 25 passengers and crew.  Rescuers worked through the night, at times thigh-deep in muck, to rescue survivors and recover the dead. A Civil Aeronautics Board inquiry blamed the crash on pilot errors.
On Aug 1 1972, Northeast merged with Delta Air Lines, which ceased operations in New Bedford in 1974.
Deceased:
Pilot Vincent Pitts, was a combat flyer in WWII. He was made flight captain by Northeast Airlines in 1953.
Copilot Roger Sweetland  joined Northeast Airlines as a pilot in 1952 and was made flight captain in 1956.
Charles Chase (NY), Phoebe Bradshaw (NY), Alan Melhado (NY),  Althea Eccles (NY), Eli Schless (NY), Mary Brownell (MA).,
Russell Bell Edgartown (MA), D.L. Chapman (NY) 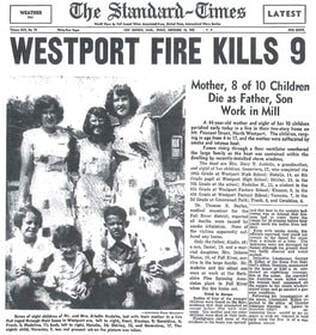 Westport's Deadliest Fire
November 13 1952  - Fatal Fire
9 Mount Pleasant Street has a long and deadly history. On November 13 1952 a fire began in a wooden rubbish container and quickly went out of control. The fire claimed the lives of nine (9) members of the Audette Family. Eight (8) children and one (1) adult perished, they were identified as Mary Audette (44) and her children, Genevieve (17), Natalie (14), Shirley (13), Madeline (11), Eleanor (9), Veronica (7), Frank (5) and Geraldine (4). The only survivors were Aladin, the husband and the eldest son, Daniel (19). Their oldest daughter, Dolores Massa, was married and residing in Fall River.

December 29 2015 - Fatal Fire
63 years after the 1952 fire, 9 Mount Pleasant Street was the scene of another fire where Caleb Nadolillo (4) perished.  The mother, Melody (32) and her daughter Bella (7) escaped the home but did suffer severe burns. Another daughter, Morgan (15) wasn’t home at the time. The fire began in the kitchen.  As of August 2019, the remains of the house were demolished and the land is vacant and for sale. 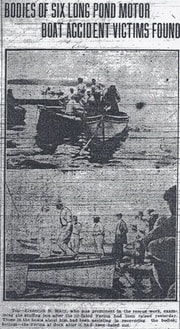 Lakeville's Deadliest Boating Accident
On Aug 9, 1913 tragedy struck Long Pond. An overloaded boat named the "Farina" sank in Long Pond resulting in the death of seven (7) people. The group boarded the "Farina" which was owned by Albert Joan of Brockton MA and planned on having an evening cruise to the southern end of the pond (Freetown side) where they were to attend a dance.
The members of the group were guests of Luther Dayton (24) from New Bedford MA who owned a cottage on the pond.  The short trip began well, but just after passing an island the boat began to take on water. It was reported by a couple of survivors that the "bottom had dropped out" of the boat, resulting in the occupants of the boat being dumped into the lake.