Henry Huttleston Rogers 1840-1909
Henry Huttleston Rogers was born in Fairhaven. As a young boy he delivered newspapers, worked as a grocery clerk and was baggage master for the Fairhaven Branch Railroad. At the age of twenty-one (21), he left Fairhaven for the oil fields of Pennsylvania, where he and a partner, Charles Ellis, started their own oil refinery.
Later Rogers became manager of the Charles Pratt Oil Co., which merged in 1874 with the Standard Oil Company. Rogers eventually became president of six and vice-president of thirteen of the Standard Oil Trust companies. As the right-hand-man of John D. Rockefeller, Rogers was one of the most powerful businessmen in country.
Rogers married his high school sweetheart, Abbie Gifford, and summered in Fairhaven with his five children. After Abbie died in 1894 at the age of 53, Rogers married Emilie Augusta Randall Hart. In 1895 he built a large mansion near Fort Phoenix in the southern part of town overlooking the bay. The house was demolished in 1915.
In 1885 Rogers began a series of benefactions to his hometown, giving Fairhaven many public buildings.
Rogers was a close friend of author Mark Twain, who often visited the Rogers family in town. At Twain’s suggestion, Rogers gave financial assistance to Helen Keller, who dedicated one of her books to him. Rogers also provided Booker T. Washington with funds for the establishment of schools for southern blacks.
At the time of his death on May 19 1909, Henry Huttleston Rogers estimated worth was between 100-150 million dollars, placing him at number 22 in the list of the top 100 wealthiest people in American history.


Rogers School
ANNOUNCEMENT OF CONSTRUCTION – 1882
On November 11, 1882, the Fairhaven Star, town newspaper of Fairhaven, Massachusetts,  The article stated:
“H.H. Rogers Esq. has purchased the tract of land east of the Iron Works and enclosed by (contemplated) Chestnut, Pleasant and Union Streets. It is intimated that some kind of a factory is to be erected on this lot.”
​ 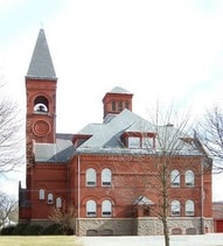 Rogers School 1855-2013                      Mystery
This was the first gift to the Town of Fairhaven by Henry H. Rogers. This elementary school building was constructed with the best school design of the times which included an auditorium, and living quarters for the custodian.
In 1890 the exterior bricks began to discolor so Mr. Rogers had them all removed and new bricks were  installed. The school was wired for electricity in 1890.
In June 2013 the decision was made to close the school. In August 2016, the bell was removed from the school’s tower to be stored for safekeeping.
On Aug 5 2019 The Board of Selectmen announced that it has entered into a purchase and sale agreement for the property. The buyer, New England Preservation & Development, intends on turning the main building into a 14-unit condominium complex. Per the agreement with the town, the exterior of the original architecture of the building will be preserved and placed on the National Register of Historic Places. In addition, the developer will demolish the newer wing of the property, built in the 1950′s, in order to build four single-family homes, as well as completely rehabilitate the Henry Rogers Memorial Park adjacent to the property.

Mystery
It had been reported that the custodian is seen walking the halls at night, especially on cold nights. It is said that he roams the building making sure the building is heated properly. 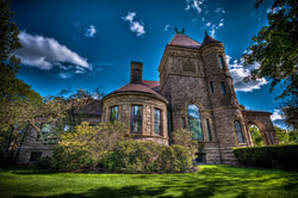 Millicent Library 1893                    Legend
The library was constructed in 1893 and was a gift from the children of Henry H Rogers and Abbie Rogers in honor of his daughter Millicent Rogers who passed away at the age of 17 due to heart failure.  Just after Millicent's death the land was acquired and plans for construction began. The cornerstone was laid  in Sept 1891 at a morning ceremony and was attended by only family. It was recorded that Millicent's brother, Henry Rogers  Jr., set the  cornerstone in place and inside the stone is a sketch of Millicent, a Rogers Family Tree, and a copy of the "Fairhaven Star"  which contained a photo of the proposed library. The library was dedicated on Jan 30 1893.
After giving a speech dedicating the Town Hall across the street, Mark Twain visited the library. “I’m glad to have seen it,” Twain wrote to the trustees. “It is the ideal library, I think.” Twain sent the library an autographed set of his books with a note commenting,” They are not instructive, but I feel sure you will like the bindings.”
Legend
There is a legend that the janitor died in the building's basement and haunts it. The janitor is described as wearing a tweed jacket and bow tie and circular glasses and was mopping the basement floor. It has also been legend that Millicent Rogers was buried in the foundation of the library and that private cornerstone laying was the ceremony.
After researching it's been determined both legends are not true.  A janitor did in fact die in the building; however he suffered a heart attack upon entering the building. The janitor also was not and did not wear clothing fitting this description and didn't wear glasses. Millicent Rogers is not buried in the foundation, she is in fact buried in the Rogers Family tomb in Riverside Cemetery. 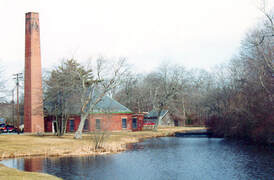 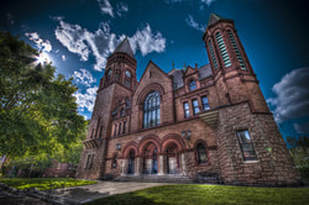 Fairhaven Town Hall 1894
This was second gift to the Town of Fairhaven by Henry H. Rogers. Originally the Town Hall housed the municipal offices, Post Office, and police station with three (3) cells. The interior features were the best at the time, and included English Oak paneling, and solid brass fixtures, stained glass windows. The auditorium on the second floor was restored in 1990 and is still used for functions today. The exterior clock tower houses a four faced clock and the building was the second one designed by Architect Charles Brigham in a French Gothic style. The dedication took place of Feb 22 1894 and the keynote speaker was author Mark Twain. 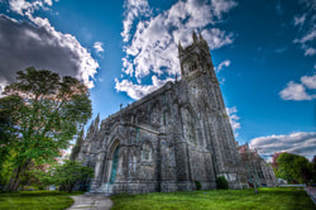 Unitarian Church 1901
The church was erected by Henry H Rogers to honor the memory of his mother, Mary Eldridge (Huttleston) Rogers. Rogers was unable to attend the dedication, so his friend Mark Twain represented Rogers. The church is an  English perpendicular Gothic cathedral.  The church was built from local granite quarried near Fort Phoenix and limestone that was transported from Indiana. 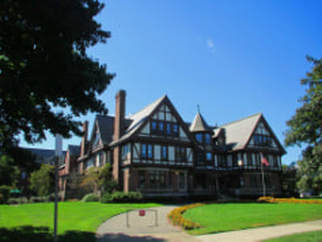 Tabitha Inn 1905
Tabitha Inn was built to accommodate an increase of visitors to Fairhaven. This Elizabethan-style hotel was named after Henry Rogers maternal great grandmother Tabitha Huttleston. There is a shield made of concrete above the entry with the letters "T I" engraved.   In 1929 The Tabitha Inn was owned by Barney Zietz (owner of the Zeiterion Theater) who lived just around the corner from the inn. Zeiterion Realty Group operated the hotel until WWII, when the US Coast Guard housed cadets there (1942-1944). In 1946 The Tabitha Inn was purchased by the Fall River Diocese of the Catholic Church for use as a nursing home. The name was then changed to "Our Lady's Haven".  In 1953 a 150 room addition was added to the rear of the building. 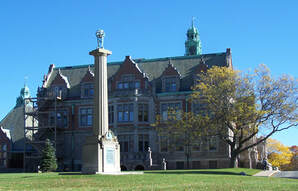 Fairhaven High School w/ Rogers Monument
Fairhaven High School 1906           Legend
"Castle on the Hill," Henry H Rogers chose to build an educational palace for the residents of Fairhaven. The Elizabethan-influence design is by Charles Brigham (who constructed many of Roger's buildings) and includes marble floors, oak paneling, stained glass windows an auditorium with a beamed ceiling and carved wooden gargoyles. The library/media center was once an octagonal gymnasium that contained the first indoor basketball court in an American high school.
The school was constructed with its electric generating plant, operated by a custodian who lived in an apartment located on the third floor. The basement level once housed industrial arts rooms and a home economics kitchen and facilities for agricultural studies. Those classrooms were eliminated in the 1930s when the first addition (now demolished) was built.  In the 1930s an addition was added to the rear of the main building, connected by an underground passageway. That addition was demolished in the 1990s when the construction of the new wing was underway. The new wing, completed in the year 2000, added updated teaching and lab facilities and improved the high school handicap accessibility.

Rogers Monument 1912
The traffic island at Huttleston Avenue and Main Street at the entrance of the town was selected as the site of the monument. The monument is a fluted granite column topped by an electric light. One the base is a bronze medallion featuring a bust of Rogers and a plaque.
The Town of Fairhaven contributed $4,000 toward the cost of the monument. It was erected in 1911 and dedicated with a ceremony at Town Hall on January 29, 1912. By the 1960s, increased traffic on Route 6 made the monument a hazard and it was the cause of a number of accidents. The monument was relocated to the lawn of Fairhaven High School in 1965.

Legend
There was a legend that was passed on for many decades that "Nothing could be attached to the exterior of the high school building or ownership would revert back to the Rogers Family." This legend led to the creation of an underground passage from the original building to the new addition. Later fire escapes were added without altering the exterior. In the late 1990's a new wing was added and it was then determined that the legend was unfounded. In 2000 a new addition was then directly attached to the original building.
A website lists the following about the alleged paranormal activity: "Various “cold spots” and poltergeist activity have been reported in the “Main building" Nothing has been documented to support these claims. 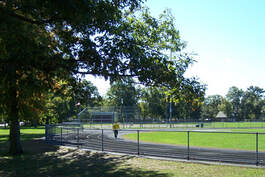 Cushman Park
Cushman Park 1908
The last gift to the Town of Fairhaven by Henry H. Rogers before his death was Cushman Park. The area previously was a swampy Mill Pond of about 5.5 acres fed by the Herring River.
Rogers bought the properties around the Mill Pond and hired an engineer to supervise its drainage and filling. The Herring River was diverted underground through a conduit that empties just north of the Fairhaven-New Bedford Bridge.
From 1903 to 1905 crews of laborers transported close to 200,000 tons of fill via a small gauge railroad on Bridge Street and dumped it into the pond. After the pond was filled, Bridge Street were raised, and Park Avenue was laid out, the park was landscaped with driving paths, trees and shrubs. A green lawn was established and the ornamental plantings took root, the new park was turned over to the town at a Special Town Meeting held on October 28, 1908, at the Town Hall. Rogers requested the park be named after Robert Cushman, an ancestor of his who had helped to organize the voyage of the Mayflower to the New World in 1620. 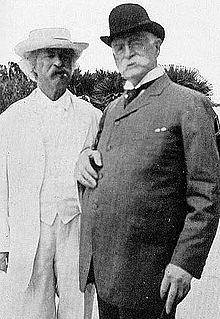